It might seem ridiculous to consider buying a stock that's run up 200% since the beginning of 2012 and now trades hands at 1,330 times earnings. But this month, LinkedIn (NYSE:LNKD) is on the short list of stocks I'm considering to add to my Roth IRA.

I've been calling out one company per month for almost two years now, and the portfolio has returned 21%, beating the S&P 500 by almost 5 percentage points!

Here are three big reasons why I think investing in the company is a good idea right now:

For those who might not be familiar, the network effect works like this: every time a user joins a service, the value of that service increases. The clearest example of this today would be Facebook (NASDAQ:FB). It wouldn't be worth joining Facebook if no one else was. But because there are over 500 million users, it's the "It" place to meet with others online.

The same thing is happening with LinkedIn. There are two sides to the equation: individual users joining LinkedIn and posting their resumes, and businesses signing up with LinkedIn to recruit potential hires. Take a look at how the two have been growing over time. 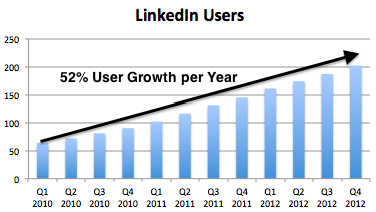 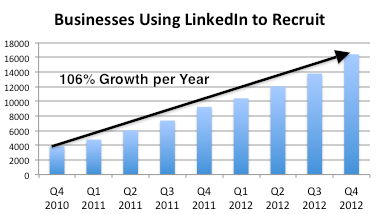 From the perspective of businesses, the only way to access the pool of 200 million (and growing) users is to pay LinkedIn. From the individual's perspective, the only way to get your resume in front of an HR coordinator at 16,000 different companies is to register with LinkedIn. That's a very powerful effect.

2. Not as expensive as you think
No doubt, there will come a day when LinkedIn misses badly on earnings or revenue, and on that day, the stock will fall markedly. I can almost guarantee it will happen.

But what I can't guarantee is when it will happen. It could be in three years, and the price that it falls to could still be well above where it is today -- making today a good place to buy in.

Either way, it's important to understand that the reason LinkedIn's earnings are so low isn't because the company can't bring any money in; it's because its spending lots of money on expanding its capacity and presence abroad (more on that below).

And that's exactly where it should be spending money. Many people wonder why Monster Worldwide (NYSE:MWW) or Facebook couldn't just replicate what LinkedIn is doing. For starters, Facebook must spend its time focusing on monetizing its social networking site. Though it came out with its BranchOut initiative, Facebook simply doesn't have the singular focus on business networking to match LinkedIn.

And while LinkedIn wisely spent 60% of its revenue on sales, marketing and product development, Monster doesn't even break out its spending in a way to compare. The very least one can tell is that the company spent 21% on marketing and promotion.

That's an important difference, as LinkedIn focuses on an army of on-the-ground recruiters to get businesses to sign up to be a part of the network.

If we look at free cash flow, instead, we see growth that the company has grown at a ridiculous rate. 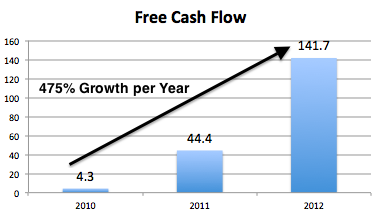 3. A global field ripe for disruption
As it stands, the company makes money through three main pipelines.

Though all three are important, it is the talent solutions division that I think holds the real potential. Right now, 62% of LinkedIn's revenue comes from the United States. Even though most users are from abroad, most companies using talent solutions are stateside.

It will no doubt be expensive for the LinkedIn to set up on-the-ground teams in different countries, but there's no doubt that LinkedIn is already popular with individuals in foreign countries. Convincing the enormous number of businesses abroad of the value proposition LinkedIn offers would be a big deal for the company's bottom line.