It's been nearly two years since Google (NASDAQ:GOOGL) shocked the mobile world by announcing its intention to acquire Motorola Mobility for an incredible $12.5 billion. With such a hefty price tag, the proposed deal would inevitably spark endless debate over whether or not it was a smart move to acquire a struggling hardware vendor with a vast patent portfolio.

Nearly a year after the announcement, the pair would score all necessary regulatory approvals and seal the deal in May 2012. The final price tag ended up being closer to $12.4 billion, and this is how Big G pegged the value of the assets it acquired at the time.

When factoring in the cash that Google bought, its net cost was $9.5 billion, and the bulk of that is allocated to the patent portfolio. The $5.5 billion valuation was much higher than the $137 million book value that Motorola was carrying for its IP, but that was net of accumulated amortization, and GAAP accounting rules don't permit revaluing intangible assets higher.

Google also sold off the Motorola Home business to Arris (NASDAQ:ARRS) in a $2.4 billion cash and stock deal, which closed this month. Big G is now the proud owner of a 7.7% stake in Arris, while its net cost for Motorola subsequently declined to around $7.1 billion.

In the four quarters since closing the deal, Motorola's actual hardware operations have continued to bleed. Motorola posts hundreds of millions of GAAP operating losses every quarter, and has cost Google a cumulative total of $1.4 billion so far just by operating. 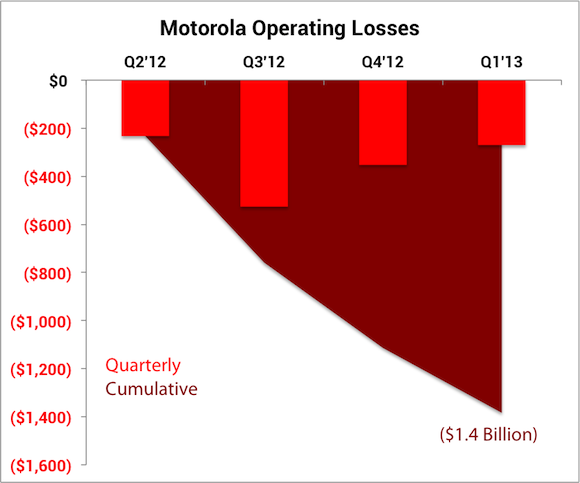 We can effectively increase Google's net cost back up to $8.5 billion, and Motorola's operating losses have no sign of abating anytime soon. Even if Googorola's upcoming "phones-plus" are a hit, the subsidiary still might not be profitable.

The star of the acquisition has always been the patent portfolio, but even on that front Google has had a pretty terrible month so far. Motorola is embroiled in numerous patent disputes with rivals Apple (NASDAQ:AAPL) and Microsoft (NASDAQ:MSFT), and things aren't going Google's way. The search giant scored some victories, but also recorded more meaningful defeats.

One painful blow was when the International Trade Commission upheld a finding that one of Motorola's patents is invalid, allowing Apple to escape the important ban that Moto was seeking. The patent had covered a sensor within phones that allow them to prevent accidental input. Separately, Motorola was trying to extract $4 billion in annual royalties out of Microsoft, or a fifth of all of Microsoft's operating income, over standards-essential patents related to Wi-Fi and video encoding. Courts said the software giant only owes $1.8 million per year, or just 0.04% of what Motorola wanted.

Both components of the Motorola acquisition are faring poorly. Operations continue to bleed while Motorola is failing to hold its own in patent disputes. Sorry, Google, but acquiring Motorola was a huge mistake.