Simply put, Android is out of control. One inevitable consequence of Google's (NASDAQ:GOOGL) staunchly open philosophy for its mobile operating system platform was that rivals were always bound to hijack it. Among the first to completely fork Android was Amazon.com (NASDAQ:AMZN). The bookselling e-tailer has unarguably been the most successful at the strategy. IDC estimates that Amazon has sold a total of 17 million Kindle Fires so far -- no small feat.

B&N had been operating its own separate Nook store, selling content for its Nook tablets. That includes all the usual categories, including apps, e-books, magazines, and more. This is why it's so notable that Barnes & Noble just announced that it was bringing the official Google Play store to its Nooks. The move will make its most recent generation of tablets like any other Android tablet, expanding its content ecosystem to include the 700,000 apps and games. 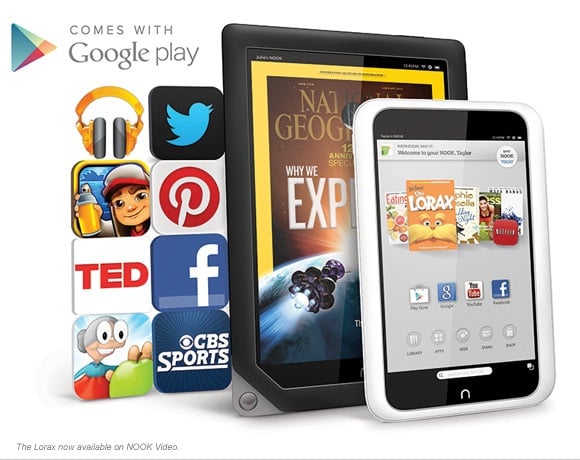 Adding Google Play is Barnes & Noble's latest admission that the Nook business is faring poorly. The company just reported that Nook revenue, which includes digital content and device sales, dropped 26% to $316 million during the busy holiday quarter. This weakness was attributed primarily to "lower device unit volume," while digital content sales were up modestly. As a result, B&N took inventory charges and markdowns. B&N has also offered promotions to clear out inventory. It handed out free Nook Simple Touch e-readers alongside Nook HD+ purchases in March.

CEO William Lynch said the Nook subsidiary remains committed to the tablet business, but the evidence shows that it might be abandoning its proprietary platform strategy and transition toward the role of any other Android OEM. This is bad news for Microsoft (NASDAQ:MSFT), too, since the software giant has a 17% stake in the Nook business. The partnership helped settle Android-related patent lawsuits that Microsoft was pestering B&N with.

One bookselling Android rebel may be succeeding, but it's not Barnes & Noble.