Midstream operators aren't the most exciting companies in the world -- pipelines and processing plants don't typically give investors much reason to clamor. However, the income these companies generate and the industry insight they provide can be vitally important in meeting financial goals. The industry insight alone from following a top-tier MLP can prove invaluable.

That's one reason why I always make an effort to listen in to Enterprise Products Partners' (NYSE:EPD) annual investor day. The company's strategically positioned assets flow through all of our major resources' basins, which has enabled the company to see what others might miss. Among many other things, this has given the company a window into the future of natural gas demand.

Over the next five to seven years Enterprise sees tremendous potential growth in natural gas demand. Overall, the company believes that we have the potential to see 11 Bcfd-20 Bcfd of incremental demand. That demand is spread across several opportunities which are outlined below. 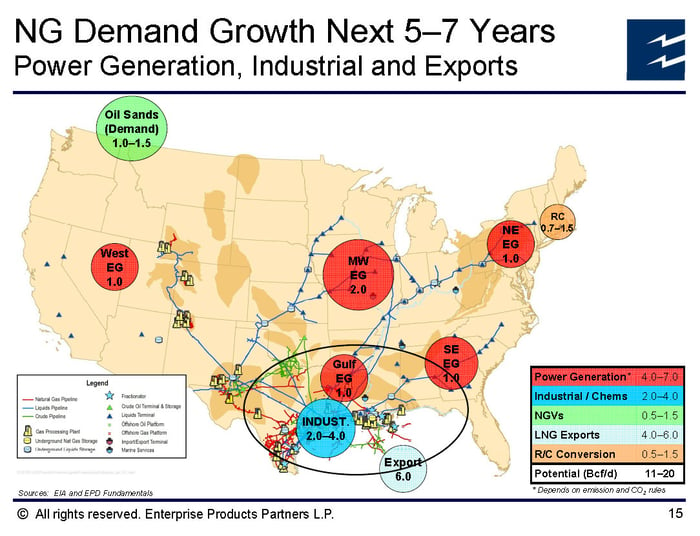 Enterprise sees between 4 Bcfd and 7 Bcfd of additional natural gas demand coming from utilities. Because natural gas is abundant, cheap, and clean, it is becoming an increasingly important fuel for utilities looking to quickly and inexpensively grow cleaner-generating fleets. It's really become the de facto fuel to replace aging coal generation units.

Industrial and petrochemicals
Not only has cheap natural gas been good for utilities, but it's beginning a renaissance in manufacturing. One of the leaders of that movement is Dow Chemical (NYSE:DOW) which is spending more than $4 billion to expand its Gulf Coast petrochemical operations. Because it's such a heavy user of natural gas, Dow is leading the charge to limit the amount of gas that's eventually exported.

According to Enterprise it sees the industrial and chemical space increasing its demand by 2 Bcfd-4 Bcfd of natural gas. The demand will be spread across a variety of industries including ammonia, steel, and glass manufacturing. What's interesting is the company has counted 78 major industrial announcements across the U.S. with 65 of those proposed plants located the Gulf Coast region.

Natural gas vehicles
Many companies are working to change the fuel industry so that natural gas is a larger part of the equation. While Enterprise does see increased incremental demand, its forecasts only call for 0.5 Bcfd-1.5 Bcfd of demand growth. That demand growth could change dramatically if more states take things into their own hands.

Increased demand for natural gas from the transportation sector will be a key driver for companies like Westport Innovations (NASDAQ:WPRT). With the low price of natural gas the payback period is easy to justify as the incremental cost of a Westport designed engine is paid back within one year. It's very possible that Enterprise's demand forecast might be a bit conservative when it comes to natural gas vehicles, but the industry still has a long way to go.

LNG exports
One of the most hotly contested future demand drivers is LNG exports. Currently, just Cheniere Energy (NYSEMKT:LNG) is approved to export gas to countries that are not free trade agreement members. However, many companies would like to join Cheniere in this very lucrative market. In fact, there are currently plans for up to 30 Bcfd of additional export terminals. However, it's very unlikely that all will be built given that the global LNG market is currently just 30 Bcfd. Enterprise sees a sustainable market potential that's probably limited to 4 Bcfd-6 Bcfd, maybe as high as 8 Bcfd.

At the investor day, the company addressed this often misunderstood debate head on. The key sticking point is the concern that unchecked exports will drive the price of natural gas much higher. Enterprise Vice President Tony Chovanec made it clear to point out: "If I haven't done anything else so far today I hope I've convinced you that the resource is plentiful and can it be produced very, very efficiently." He went on to say, "[Make] no mistake about it, at Enterprise we believe that exports in free markets are important to balance those markets but more importantly, we believe that exports are important to keep the supplies coming." The bottom line here as far as Enterprise is concerned is that we have more than enough gas to export while keeping prices reasonable even with all the demand drivers we've seen thus far.

Residential and commercial conversion
A final, and smaller, driver of future natural gas demand is the conversion of homes and businesses from fuel oil to natural gas for heating in the winter. What was once the one area that drove the price of natural gas, won't be as big a driver going forward. As it stands, Enterprise sees just 0.5 Bcfd-1.5 Bcfd of incremental demand from these sources.

The Foolish bottom Line
While natural gas isn't a favorite fuel of producers these days, Enterprise sees a big future for the commodity. Its view is that if there's a market, producers will produce, which is why it believes that we'll see a reasonable amount of natural gas exports in the future. Overall, the company sees a bright future in transporting gas and liquids, especially along the Gulf Coast which will see more than half of the overall demand growth.