Please ensure Javascript is enabled for purposes of website accessibility
Log In Help Join The Motley Fool
Free Article Join Over 1 Million Premium Members And Get More In-Depth Stock Guidance and Research
By Adam Levine-Weinberg – May 6, 2013 at 10:21AM

Rite Aid shares have rallied to a new five-year high in the past six months due to a surprise fiscal-year 2013 profit. However, a slowdown in sales suggests that the good times may end soon for Rite Aid shareholders.

In a series of articles over the past two months, I have argued that the apparent turnaround occurring at Rite Aid (RAD -0.49%) over the past year or so has probably been a fluke, and that the company may be about to head downhill again. If you missed the earlier articles, the main argument is simple: In 2012, Rite Aid benefited from several one-time items that boosted profits. The two biggest factors helping Rite Aid were: 1) a dispute between Walgreen (WBA 0.22%) and pharmacy benefits manager Express Scripts (ESRX), and 2) a wave of generic-drug introductions, which improved pharmacy gross margin.

Walgreen and Express Scripts eventually came to a compromise, and since September many of the customers who had switched to Rite Aid or CVS Caremark (CVS) last year have been returning to Walgreen's pharmacies. Rite Aid's management estimated the benefit of this dispute at $70 million last year, representing more than half of the company's total profit.

Furthermore, 2013 will feature a much slower pace of generic-drug introductions, while insurers continue cutting their reimbursement rates. These two factors could potentially reverse Rite Aid's pharmacy gross margin gains.  With some of last year's unusual tailwinds thus likely to reverse in fiscal year 2014, one might expect shareholders to be cautious about Rite Aid's prospects.  Instead, shares have more than doubled in the last six months, reaching a new five-year high: 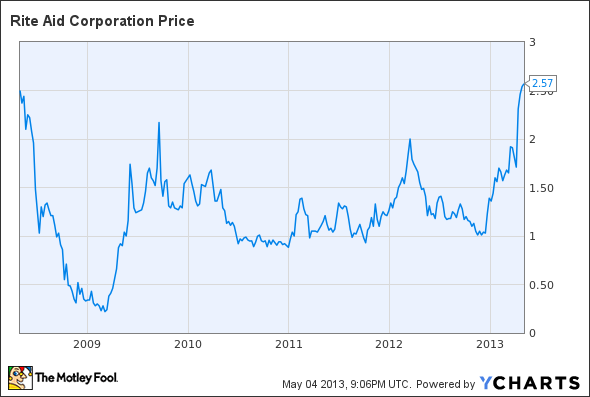 Recent sales data appear to confirm a slowdown in sales at Rite Aid, which will ultimately pressure the bottom line.  Accordingly, I believe that Rite Aid shares have become overvalued during their recent run.

Sales data continues to disappoint
Last week, Rite Aid reported disappointing sales data for April. This bolsters the case that the company's surprise profit in fiscal year 2013 did not reflect a sustained improvement in the business. Same-store sales decreased 4% last month, with front-end sales down 3.5% -- partially due to the shift of Easter to March this year -- and pharmacy same-store sales down 4.2%. Prescription count was down 0.2% year over year, confirming that some customers are taking their business back to Walgreen. In fact, Walgreen experienced a 9.7% increase in prescription count last month, or 6.3% accounting for a calendar-day shift compared to 2012. The divergence in pharmacy results between Rite Aid and Walgreen is very significant.

For the combined March-April period, Rite Aid's same-store sales were down 3% due to the introduction of new generic drugs. Front-end same-store sales increased 0.1%, and prescription count also increased 0.1%. In other words, if we adjust for the timing of Easter and the effect of generic introductions, Rite Aid's comparable-store sales have not turned negative yet. That said, sales gains have slowed to a crawl, and may not be sufficient to cover normal inflation in operating expenses.

A look at Rite Aid's monthly sales data for 2012 and 2013 (year to date) shows a clear downward trend. To be fair, some of the deceleration in late 2012 was caused by a higher rate of new generic introductions. However, this effect has tapered off in the past several months, while the downtrend continues:

Alternatively, since a picture is worth a thousand words, consider the following chart of same-store sales.  If this picture doesn't make you second-guess Rite Aid's soaring share price, I don't know what will! Data drawn from Rite Aid monthly press releases (as shown in table above).

I think Rite Aid will have trouble keeping up with these two behemoths in the long run, while the company's $6 billion debt load makes it an unappealing acquisition target. Furthermore, the stock is not particularly cheap; it trades at more than 20 times earnings.  That's why I'm bearish on Rite Aid. Accordingly, I have entered a long-term underperform rating for the stock on my CAPS page.  Let me know what you think in the comments box below.