Almost two years ago, I identified 10 companies that I would be putting $40,000 of my own retirement money behind. This was, has been, and will continue to be my way of helping the world to invest better.

Today, I'm going to tell you why Latin American wholesaler PriceSmart (NASDAQ:PSMT) will remain in "The World's Greatest Retirement Portfolio" for at least the next year.

For those who might not know, PriceSmart is a spin-off of North American counterpart Costco (NASDAQ:COST). To this day, PriceSmart operates in much the same way as Costco, focusing on slow and steady growth while creating value for all stakeholders. 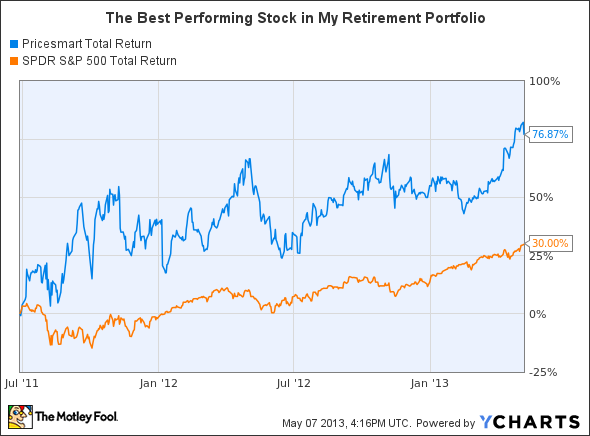 Unexpected strength
If you go back and read my original recommendation from two years ago, you'll see that I focused a lot on expats from North America. As baby boomers age, and health-care costs continue to skyrocket, many countries served by PriceSmart become attractive retirement locales -- both for the nice weather, and the quality of health care. It was this growing population, I postulated, that would drive sales at PriceSmart.

It turns out I was wrong in a really great way: Locals love it, too.

Over the past two years, my wife and I have spent months volunteering at a tiny, isolated organic coffee farm in Costa Rica. The owners get nearly everything they need either from the land, or from the corner store just up the hill. That's why I was surprised to find out one of the only reasons they'll leave the village is to run to PriceSmart -- which is more than an hour away.

Recently, the company has lowered its margins, in an attempt to increase volume and make the value more enticing for locals who might not have the same economic resources as expats do. This move has worked out, and it's increasingly important as Wal-Mart (NYSE:WMT) begins to enter the markets PriceSmart dominates.

Two variables to watch closely
Moving forward, there are two key variables I'm watching to make sure PriceSmart is worth holding in my retirement portfolio. The first is the company's expansion plan.

As Latin American markets mature, PriceSmart has an enormous opportunity. Though Brazil is largely dominated by Wal-Mart, Costco has no plans to move south; the rest of South America is open for the taking. PriceSmart has already opened three stores in Colombia. The first two have done remarkably well, and the third only recently opened.

If PriceSmart opened more than five new stores in a year, I would be concerned; I don't think there's a need to rush in South America. Doing so could lead to hasty and unprofitable decisions. At the same time, if the company were to stop opening South American stores altogether, I'd also be concerned, as the stock's price assumes that the move south will continue.

The second variable to watch is same-store sales. This variable is important, because it lets you know that revenue is increasing organically, rather than from simply opening more stores. Here's how the company has fared since I bought in: 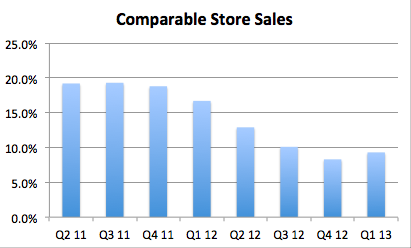 Though some might be concerned that the numbers are slowing down, I think that's only natural. As time goes on, it gets harder and harder to match the previous year's numbers. As long as same-store sales are increasing by 5% or more, I'll be satisfied.

What should you do?
If you're looking to buy into PriceSmart now, I suggest doing it in stages. At today's P/E ratio of 34, the stock certainly isn't cheap. It would be worth buying a starter position now and adding to that position either as go down or you get more knowledgable about the company.