Amazon.com's (NASDAQ:AMZN) lines of business are as varied as the products it sells. The company has its hand in everything from book publishing to tablet manufacturing, and from streaming video to selling cloud services. However, its main opportunity is still the same as it was back in 1995 when it first opened those virtual doors: to sell more stuff.

Things have been going well on that score lately. Amazon's merchandise sales doubled over the last two years -- to nearly $40 billion. But that number really just scratches the surface. Online retailing has a bright future ahead, and Amazon can count on at least three major tailwinds as it tries to keep its growth chugging along.

Strong merchandise sales
First, there's the rush to online shopping. Actually, it's more like a stampede now. Gone are the days when people thought twice about using a credit card on the Internet. Instead we've seen e-commerce adoption rates spike, with sales up 15% in the last year. Online spending even cracked into the double digits as a percentage of all shopping recently. In the fourth quarter of 2012, e-commerce accounted for $1 out of every $10 of retail spending in the U.S.

As the leading online seller, Amazon is a major beneficiary of that shift in retailing trends. The company now boasts more than 200 million active customer accounts, up from 160 million in 2011. Many of those 40 million new Amazon shoppers used to buy exclusively from places like Best Buy and Target. But lately, while they still roam the aisles at those retailers, many consumers are opting to make their purchases from Amazon.com. And the e-tailer has been selling plenty of additional products to all those newly converted customers. Amazon's product sales were up 32% in the holiday quarter, lapping the 46% growth from the year before. With online retail still just a tiny portion of overall global retailing, the company has a long runway ahead of it. However, it looks like sales taxes are coming to online shopping. And that will hurt the pricing advantage enjoyed by Internet-only retailers like Amazon. But that change is actually good news for Amazon's product sales growth because it allows the company to build out new warehouses. Until just over a year ago the company operated with an awkwardly stretched infrastructure in the United States. Amazon benefited by keeping its physical locations as sparse as possible so that it could offer products free from state sales taxes. But that strategy has run its course. State governments are winning the battle against online sellers, and Amazon has already started collecting taxes in several more states. The rest of the country will only be a matter of time.

Amazon Prime
Second, Amazon can look to its Prime members for increasing sales growth. While the company doesn't share member numbers, independent estimates peg subscribers at 10 million -- and rising fast. These customers pay Amazon $79 a year for unlimited two-day shipping on most products.

Taking a page from Costco's successful retail model, Amazon engineered its Prime service to promote deep levels of customer engagement while padding the company's bottom line. Once shoppers are in, they're hooked. As members, they tend to look to Amazon to fill a wider range of product needs, from batteries to baby clothes. And Prime members are heavy users, too. They spend on average $1,224 per year on the site, or double what non-Prime customers spend. Amazon's main challenge is to keep these members happy -- and to attract new ones -- mostly by boosting the number of products it offers with the addictive bonus of unlimited free, and fast, shipping.

Distribution and new business
Which brings us to the third factor driving Amazon's sales growth: new warehouses, services, and AWS.

While the e-tailer has lost a slight price advantage with the growing imposition of state sales taxes on online retailers, it has thereby gained the freedom to build warehouses wherever they are needed. Amazon has taken advantage of that freedom by opening 20 new fulfillment centers last year alone. With new locations spread across the country, the number of products that Amazon can deliver quickly and cheaply only grows. And with that improvement, the company can reach deeper into just about any retail sector you can name. Overall, product sales growth has outpaced Amazon's media segment, which includes sales of digital goods like e-books and movies. Amazon Web Services, or AWS, is growing even faster -- albeit from a much smaller base. 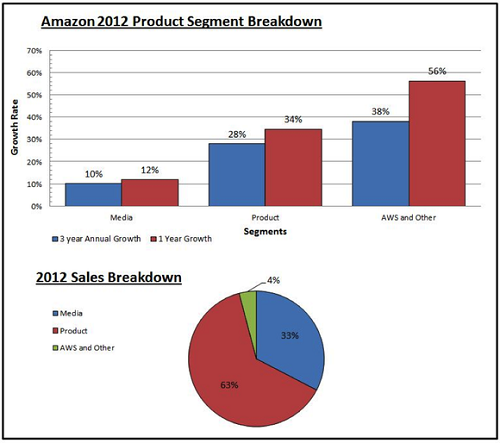 Another avenue for Amazon's growth is in service sales. The company makes money by providing vendors access to its world-class selling infrastructure. Nearly 40% of Amazon's sales come from these third-party merchants. And those sales are big profit drivers. Amazon collects higher margins from them than on its own products because access to its powerful brand and stellar logistics are worth a premium to sellers. This marketplace is still growing fast, too, outpacing Amazon's overall growth last year

And finally, there's the cloud services division, or AWS, which currently just qualifies for a footnote in the e-tailer's financial statements. However, that won't be true for long. The cloud services industry is forecast to balloon into a $70 billion market by 2015. With Amazon leading the industry right now in terms of customer base and service portfolio, AWS is well positioned to hold that lead as the market blossoms. That could make it the biggest driver of revenue and profits for the company in a matter of years. In fact, management expects the division to eventually rival its product sales in terms of size. While Amazon collected just about $2 billion in sales through AWS last year, Wall Street analysts expect that number to jump to more than $15 billion by 2020.

The Foolish bottom line
The good news is that despite years of phenomenal growth, Amazon hasn't come close to tapping its full potential. The bad news, though, is that the company will need to fully utilize these opportunities to keep outperforming against bigger and badder rivals in order to justify today's stock price.

The Huge Opportunities Ahead for Amazon.com @themotleyfool #stocks $AMZN Next Article
Current