The investing hype that led Groupon (NASDAQ:GRPN) to a $15 billion valuation has since abandoned the company. In a twisted irony wrapped in its own discount-oriented business, the company now trades for more than 50% off that value, at around $4 billion. However, Groupon is now a much different company since its IPO. While bears have written off the company based off its past hype, the company frantically searches for a solid business and just may have found a sustainable model.

The old Groupon
The old Groupon was focused on growth at all costs. Building up a subscriber list was a key focus, as well as acquiring all the potential competitors worldwide. This led Groupon to its current goodwill of more than $200 million, marketing expenses that equaled 54% of revenue in the second quarter of 2011, and a subscriber list growing from 23 million in 2011 to its current number at roughly 42 million.

This focus on growth took away the focus on fundamentals, like proper accounting. After two financial restatements, and with Groupon's auditors describing the company as having "material weakness in its internal controls," founder and former CEO Andrew Mason stressed that the company had to get its act together. But, true to Mason's distance from Wall Street's norms, he said this while drinking beer at the company meeting.

Mason was let go at the end of February, and he wrote a witty letter saying goodbye to employees, urging them to "have the courage to start with the customer."

The new Groupon
Now, further from the hype of its IPO and Mason's antics, Groupon searches for solid cash flow with a modified business model. Acquiring customers has taken a back seat to finding profit, as marketing spending decreases: 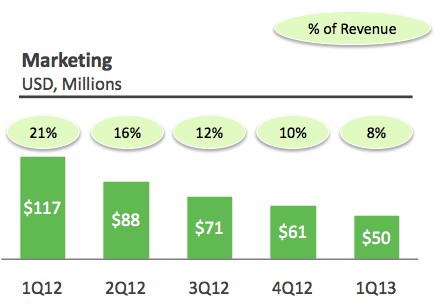 And this is evident in customer growth, as the number of customers who have purchased a Groupon in the past 12 months increased only 1.7% since the last quarter, compared with a 3.8% increase from a quarter earlier. And in fact, Groupon lost 300,000 international active customers: 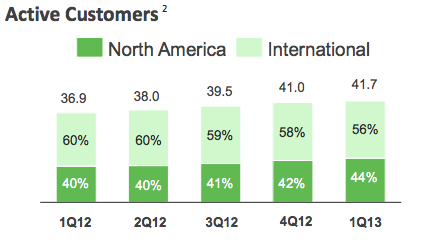 Groupon is actually struggling internationally. Not only did it lose active customers, but unit sales fell 18% compared with rising 37% in North America, and the average spend per international customer has fallen to $129 from $197 a year prior: 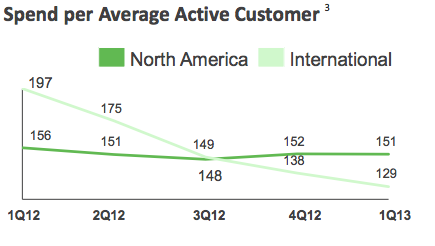 Given that LivingSocial, the daily-deals site that Amazon.com has a 29% stake in, had a huge goodwill write-off of $500 million for overseas acquisitions earlier this year, and the poor performance of Groupon's international business, a close eye should be kept on Groupon's $127 million in international goodwill. Chances are that the businesses Groupon purchased when customers spent $197 versus their spending of $129 today aren't worth the same.

Beyond the local deals the site started with, Groupon more than doubled its Goods business in North America, from $78 million in the first quarter last year to $165 million this year, while reaching $241 million in the holiday-filled fourth quarter. Its travel business in North America grew almost 50% from a year prior to $66 million this past quarter.

We are also midstream in building a marketplace, which we believe will fundamentally alter the way our customers interact with Groupon. Just a few years ago, our business was predominantly driven by daily deal email. In the first quarter, less than 45% of our North American transaction came from email. Mobile and search accounts were increasing percentages of our total business.

A different Groupon
Given that Groupon is much different from when it had its IPO, both potential new and old investors should keep their eye on the changing business. New leadership, a more diversified business model, and potential international weakness mark a new era for the daily-deals space.