That was the news for Monsanto (NYSE:MON) yesterday, and it probably wasn't even the most important revelation of the day for the company.

An open and shut case

Indiana farmer Vernon Bowman signed an agreement in 1999 that he wouldn't collect the seeds after harvesting his crop of Roundup-resistant soybeans provided by Monsanto. In an attempt to save money, Bowman bought commodity grain from a grain elevator. Such grain is usually used as feed for animals; but Bowman planted it, knowing that some may contain Monsanto seeds.

After using the Roundup herbicide and harvesting the plot, it turned out there were resistant seeds in Bowman's purchase. He continued to use these seeds for eight years without paying Monsanto.

Though the Supreme Court ruled unanimously in Monsanto's favor, Justice Kagan made it clear this wasn't as far reaching a ruling as some may have you believe: "Our holding today is limited," Kagan said, "addressing the situation before us, rather than every one involving a self-replicating product."

Government responds to public outcry
But no sooner had the court verdict been read than Monsanto, as well as fellow GMO-producer Dow Chemical (NYSE:DOW), were dealt a blow by the U.S. Department of Agriculture.

The news came as a surprise to both companies, but the Department of Agriculture said it was inundated with requests from the public to continue investigating the GMOs before granting approval.

Dow said that herbicide-resistant weeds were growing rapidly in the United States, and approval was needed to meet this potential crisis.

A long-term solution?
Showing my colors a little, it's hard for me to sympathize with either company. As chemicals are used, nature usually figures out a way to engineer organisms (weeds) that are resistant. The only way to combat these new resistant strains is by using stronger chemicals.

It doesn't take much brain power to see what, over time, this leads to: the use of stronger and stronger chemicals that not only pose a threat to wildlife and the balance of nature, but human health as well.

As people become more and more knowledgeable about the topic – and long-term studies are performed on the effects of GMOs – both to humans and wildlife – I could easily see this pubic outcry being just the tip of the iceberg.

A 30-year study conducted by the Rodale Institute in Pennsylvania also confirmed that organic farming yields just as much as conventional farming (better during droughts, too) with a lower ecological footprint. 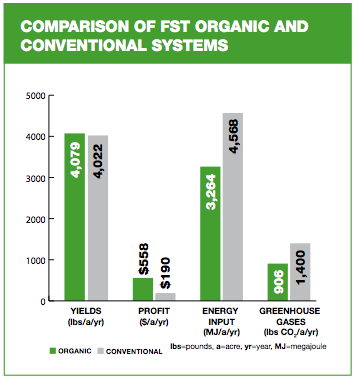 It's important to note, however, that GMO seeds were used for only the last three years of the study, as they weren't readily available when the study began.

Of course, time will tell if I am right or not, but I think there are better choices for your investment dollars.