Goff (NASDAQOTCBB: GOFF), a social recruiting-company-turned-Colombian-gold miner, did not exist as an incorporated business before the summer of 2010 and did not trade as a public company until March 2013. Yet since its debut on the over-the-counter market, on average it has traded more shares each day than Apple or ExxonMobil.

Goff's rise and fall -- and massive trading volume -- reads like a playbook for how penny stock promoters hype a stock. Goff is not a viable company but a blank canvas, void of everything but press releases and false hope. Thus far in 2013, it has had wholesale changes in both strategy and ownership. It has not recorded a single dollar of revenue, ever -- which isn't abnormal for a shell company .

Investors, undeterred, uninformed, and trying to turn a quick buck, nonetheless lined up to buy the stock, to the delight of the penny stock promoters who had been pumping Goff several times a day across multiple sites. 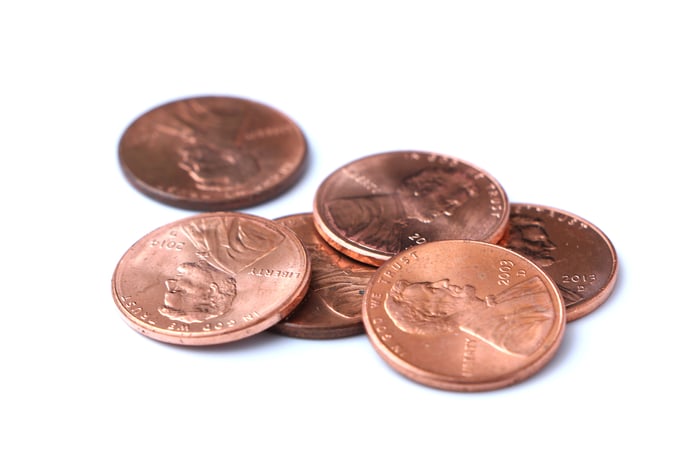 On April 2, just as the hype game was getting going, a Motley Fool blogger was asked privately about writing a blog post on Goff.

A person calling himself "John O'Connell," purportedly representing "Investor Associates, LLC," contacted the blogger via LinkedIn. O'Connell offered "four-figure" compensation to write a positive article about the company -- and when our blogger declined the offer, O'Connell even offered to write it for him, if the blogger would simply post under his own byline.

The blogger still declined, and immediately thereafter brought it to our attention. When I spoke with O'Connell by phone, he told me he had only reached out to two people, neither one taking him up on the offer. He ceased such blogger outreach once realizing it was against Fool rules, he said.

And yet, in a stroke of incredible good fortune and unbelievable coincidence for the stock promoters, somehow blogs got written -- glowing blogs, each writing optimistically about a company that, to recap, (1) has never made a single cent and (2) went through a wholesale management and business-model change less than 90 days prior.

Several blogs were submitted through our own open Blog Network platform; anyone who signs up can post an article before it is reviewed for syndication. Since early April, my colleague Roger Friedman, Blog Network president, has banned four bloggers because they submitted suspiciously glowing posts on Goff.

Each post was flagged by a Blog Network reviewer and deleted right away, and Roger then severed the relationship then and there. (Aside from being obviously wrong, accepting third-party payments to write about a stock is against The Motley Fool's rules. We also have strict rules against publishing stories on micro-cap companies with limited liquidity and/or low share prices to avoid manipulation of stock price, intentional or not.)

Only one of the disqualified bloggers even replied to the notice of termination; he appealed for a second chance, claiming it was a misunderstanding. When we questioned the nature of his Goff post, he said it wasn't a big deal: "I am on a regular basis offered compensation to write about multiple firms."

I am on a regular basis offered compensation to write about multiple firms.

It's impossible to know just how widespread is the quid pro quo between bloggers and stock hypesters. But it is possible to know that John O'Connell is a phony -- the LinkedIn profile he used for his outreach has as its headshot an actual photo from an insurance salesman in Milwaukee (who denied any involvement with John O'Connell and confirmed that his LinkedIn profile photo had been copied without permission).

Even still, O'Connell may have gotten some bloggers to take the bait.

Over on SeekingAlpha, another open blog platform, four positive posts were written during the stock's rapid ascent -- and those four were syndicated to major financial portals like Yahoo! Finance.

How to launder a bullish call
In addition to wider distribution for their pump, the promoters got the invaluable stamp of legitimacy. Consider this sleight of hand: On April 4, a blog post published on SeekingAlpha stated: "Boutique research firm Murphy Analytics covers the stock with a price target of $4 a share." (That link, from the original article, doesn't work; you can see the report here.)

On April 5, PreferredPennyStocks.com, one of the sites aggressively touting Goff, sent an email to its email subscribers that said, in part: "As put by an analyst from SeekingAlpha: 'Boutique research firm Murphy Analytics covers the stock a [sic] price target of $4.00 a share.' At this rate there is every reason to believe that these guys are right on point!"

The "boutique research firm" in question here was paid $5,500 for initiating coverage on Goff, too -- although the disclosures in the analyst's report state that "no part of the compensation to [Murphy Analytics] is tied to any content contained in this report or any view expressed in this report."

Murphy Analytics' Patrick Murphy told me that the Goff report was funded by a third party, but that "even if a third party pays for the report, the reader should assume the covered company is funding the report directly or indirectly," because in all likelihood the funding is coming from "the company's investor relations firm or an affiliate operating with a budget funded by the company."

As a CFA charterholder, Murphy abides by high levels of professional ethics, and he stipulates in his disclosures that being paid by a company doesn't influence his work. Yet, the sequencing is a disaster for retail investors:

Have a look at Goff's stock chart:

The since-deleted Fool blog posts and the four bullish Goff articles on SeekingAlpha were published between March 20 and April 9, right as the stock began its devastating slide. Goff reached an all-time high of $0.65 intraday on April 8. It's now at $0.02.

I emailed the SeekingAlpha bloggers who wrote glowingly of Goff. Two did not respond to my questions; two denied any contact with Goff or its representatives and said they discovered the company via screens or friends.

When I reached out to the email address provided on Goff's website, the email was immediately returned as "undeliverable." Queries made through the company's "contact" form on its website were not returned, but soon, the company may have to answer for itself.

This week, Goff and its third-party promoters were sued in a California court for engaging "in a scheme to disseminate spam emails in order to artificially create a marketplace for the stocks of worthless companies at artificially high prices."

Getting the word out
The pattern for these penny stock pumps is remarkably consistent. Stock is ignored. Stock is hyped. Stock takes off. Stock tanks, below its pre-hype levels. (The reliability of that pattern is why our contra-penny-stock-spam returns tracker, TMFStockSpam, is currently ranked seventh out of 75,188 players in our CAPS system.)

To feed the beast what it needs -- the email addresses of gullible or naive speculators -- PreferredPennyStocks.com and its brethren resort to some old tricks.

For starters, the pumpers do a masterful job at insinuating massive profits from a small initial sum. One constant: empty promises of 1,000%-plus gains in a matter of weeks. For example, PreferredPennyStocks.com touts a stock's 2,200% gain on its homepage... but that stock is currently trading for less than 1 cent.

But, again, the promoters find ways to leech off the credibility of mainstream financial journalism.

Forbes.com reported record traffic in March. At the bottom of every article page on its site is an innocuous-looking "From Around the Web" ad unit meant to look like editorial content.

The company behind that ad unit is HowLifeWorks, which eschews traditional display advertising in favor of "advertorials" -- ads that masquerade as legitimate article content.

The first advertorial on a recent day, "Small Investors Are Making Huge Returns Trading Penny Stocks," is an effective advertisement for a penny stock operation called PennyStocks.com. Once you click from the advertorial to PennyStocks.com, the site aggressively pushes you to sign up for its alerts newsletter.

Once there, it gets even slimier. For one thing, it can be difficult to get off these lists. Here's the press release describing the lawsuit against Goff and its promoters: "In spite of multiple attempts by the Plaintiff to opt out of these unsolicited emails, the spam continues to be sent to his inbox."

So it fakes them.

When reached for comment, Mark Cuban said, simply, "It's fake," and also pointed out that @MarkCuban isn't even his Twitter handle (his is @mcuban). Furthermore, there is no evidence that @MarkCuban, whoever that is, or @mcuban, has ever tweeted what PennyStocks.com claims.

Also a fabrication: The PennyStocks Twitter handle has fewer than 4,500 followers, not the 127,000-plus it claims. It last sent a tweet in 2011 (and its profile refers to a site called HotStockMarket, not PennyStocks.com, anyway).

Pennies worth nothing
Penny stock promoters go to a lot of trouble to appear legitimate, and they sucker in naive, greedy, or unwitting investors (refer again to Goff's rise and fall).

Yet anyone taking a flier on these types of stocks isn't an investor at all. Investing is about finding solid businesses with competitive advantages, competent managers, and strong and improving financial results.

This is speculation. If speculating in penny stocks is your thing, consider this: You'd be better off igniting a pile of your own money.

At least your cash would disintegrate in plain view.