U.S. stocks achieved another record high yesterday, but between a larger-than expected fall in April housing starts and the highest number of jobless claims in six weeks, investors have their pick of reasons to knock stocks down from those heights. The S&P 500 (INDEX: ^GSPC) and the narrower, price-weighted Dow Jones Industrial Average (INDEX: ^DJI) are down 0.24% and 0.17%, respectively, as of 10:05 a.m. EDT.

Follow-up: Cisco shares surge
Yesterday, I argued that the 7%-plus after-hours pop in shares of networking-equipment manufacturer
Cisco Systems (NASDAQ: CSCO) was not the product of low after-hours trading volume and would be entirely sustainable in the next ordinary session. This morning's share prices appear to confirm that, up almost 13%. Read the full article to find out why the shares still have room to run from these levels.

Wal-Mart's stock gets rolled back
Retailing juggernaut and Dow component Wal-Mart Stores (NYSE: WMT) reported results for its fiscal first quarter ended April 30 this morning. Investors didn't find the numbers to their taste and are rolling back the stock's price this morning.

Wal-Mart earned $1.14 per share in the first quarter, and while this was just above the midpoint of the $1.11 to $1.16 range the company had given as guidance, it fell shy of analysts' consensus estimate of $1.15.

Quarterly revenue rose just 1% to $114.19 billion -- below the lowest estimate provided by 16 analysts. Worse yet, same-store sales at Wal-Mart U.S. dropped 1.4%; the company had expected those sales to be unchanged.

Looking forward (stock prices are forward-looking, after all), the company now expects to earn $1.22 to $1.27 in the current quarter. Again, this range falls below the consensus estimate of $1.29, and the midpoint of $1.245 is only half a penny higher than the lowest estimate from 22 analysts. 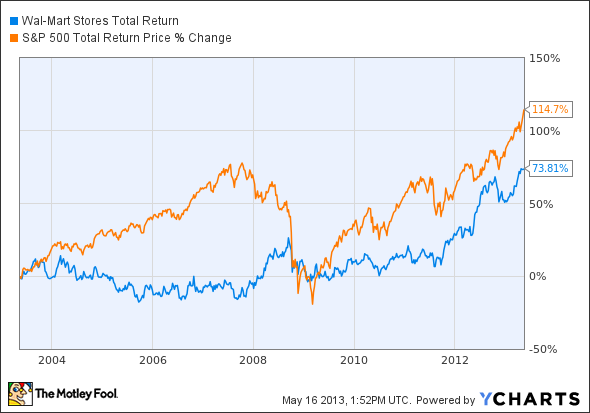 One compensation: The stock price has been consistent with the Capital Asset Pricing Model in that the lower returns have also been paired with lower volatility. Nevertheless, I don't think that's sufficient reason to own the stock. If you want to own shares of a dominant company that was overvalued in the late 1990s, I'd rather send you in the direction of Cisco Systems.