Uranium prices are in for 2012, and costs continue to head higher. The magic molecule's price tag is up over 400% in the past decade and could continue to cut into your dividend stocks' profits in the years ahead. I ran the numbers for some of the top nuclear-producing utilities in the country, and here's what I found out.

It's not us; it's them
In 2012, U.S. nuclear power plant owners and operators purchased 59 million pounds of U3O8 equivalent, roughly the same amount as in 2003 and well below its 2006 demand peak of approximately 65 million. 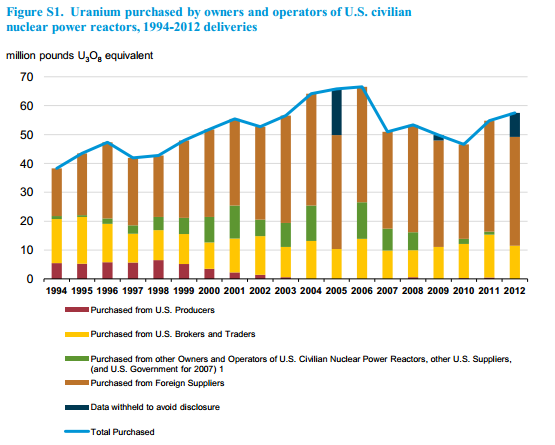 But over the same period, prices have skyrocketed. In 2011, 10 bucks would get you a pound of uranium. Now, the same pound costs power companies an average $54.99 per pound. 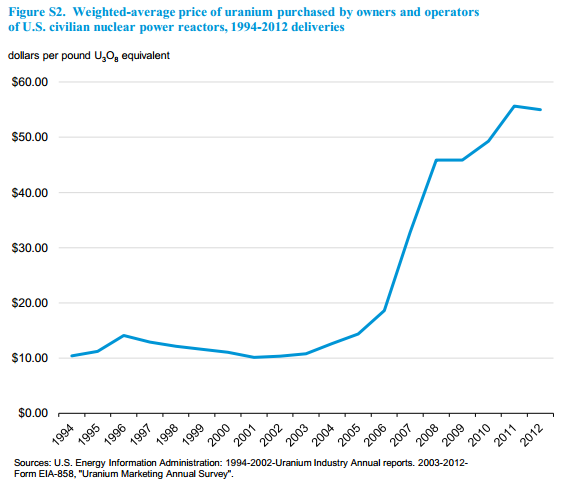 Seventeen percent of uranium originates from within the U.S. and comes with a slightly higher $59.44 cost. The remaining 83% comes from foreign sources and costs $54.07 per pound.

With relatively steady demand in the U.S., the spike in uranium prices is out of our control, regardless of whether it results from increased demand abroad or reduced global supply. Either way, that makes U.S. power companies (and your dividend stocks) price takers, not price makers.

Utility costs
Companies like to keep costs and suppliers secret, but I found an easy approximation that begins with one company's bragging rights. According to Exelon (NASDAQ:EXC), this nuclear-centric power company's 19,000 MW nuclear fleet produces 20% of our nation's nuclear energy.

Working my way back from these two numbers and newly released national statistics, I calculated uranium costs for four of nuclear's heaviest hitters, and the results were fascinating.

Exelon spent around $638 million on uranium in 2012, more than double Duke Energy's (NYSE:DUK) $282 million. Each uranium outlay is directly related to nuclear capacity, so it makes sense that Exelon's expenses would be highest, while FirstEnergy's (NYSE:FE) $133 million puts it lowest.

For a pinch of perspective, I also compared uranium costs with each utility's 2012 net profit. While earnings aren't the most reliable metric to judge long-term capital-intensive companies like utilities, it gives us an idea how expenditures added up last year.

Exelon dished out 55% of its earnings in uranium expenses, while Southern (NYSE:SO) sacrificed just 10% of its $2.4 billion in net profit. FirstEnergy followed with a 17% payout, while Duke doled out 16%.

But while costs today mean something to investors, costs tomorrow are what really matter. If Uranium's 400% increase keeps up over the next decade, Exelon's prices will mushroom accordingly. And even though Southern currently spends more on the magic molecule than FirstEnergy, its 16% capacity reliance gives it the most protection from volatile prices.

The end of nuclear?
Luckily for investors, there's more to power pricing than meets the eye. As an example, Exelon currently contracts with three suppliers for guaranteed supply requirements through 2016. Its enrichment agreements have the company set through 2017, fuel fabrication through 2018, and conversion services through 2020.

And while uranium hedging isn't common practice today, markets have a way of creating themselves for vital goods with volatile prices. Recent natural gas price increases pushed many utilities to take one-time hits for bad hedges, but the companies kept plants powering through thick and thin.

Uranium was a $3.2 billion market in 2012 -- and it could easily hit $15 billion in the next decade. Energy diversity is never a bad thing, and nuclear-centric companies like Exelon have worked around the kryptonite conundrum by sourcing from multiple suppliers. For now, at least, uranium spending is cost that remains relatively under control.