The airline sector has really taken off over the last six months, with nearly every major name posting big gains for investors. Of the four largest publicly traded airlines, US Airways (NYSE: LCC) is a laggard even though shares have risen more than 40% since Thanksgiving; by contrast, Delta Air Lines (NYSE:DAL) shares have nearly doubled. Last fall, any airline stock was a good stock to buy due to the sector's remarkably depressed valuation. 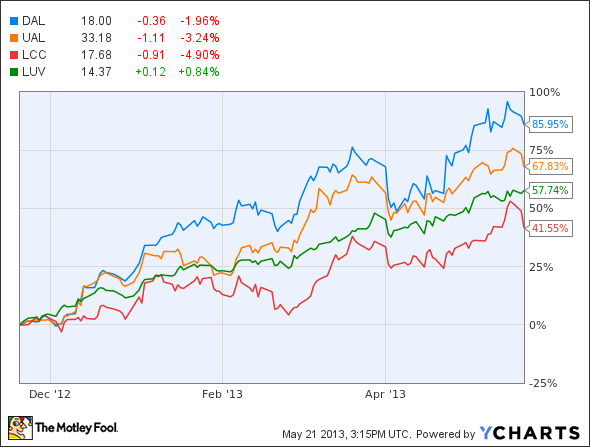 After the recent airline rally, it's harder to recommend investing in the major airlines. With the exception of Southwest Airlines (NYSE:LUV), they all carry significant debt burdens and/or pension liabilities. Moreover, the major carriers all reported disappointing unit revenues last month, highlighting their continuing susceptibility to economic weakness.

However, there are still good stocks to buy in the airline sector, if you look a little further afield. Allegiant Travel (NASDAQ:ALGT) and Spirit Airlines (NYSE:SAVE) are the two pioneers of the "ultra-low-cost carrier" concept. By keeping costs and base fares low, but charging fees for things like checked bags, carry-on bags, seat assignments, and onboard snacks and drinks, these companies have consistently achieved industry-leading margins. This positions Allegiant and Spirit for long-term earnings growth.

Money machines
Allegiant and Spirit both have established track records of profitability, unlike many of their airline peers. This stability makes them better stocks to buy for long-term investors. Allegiant has been profitable for 41 consecutive quarters , while Spirit has been profitable for each of the last four years. In fact, neither company has been in much danger of losing money recently. As the above chart shows, Allegiant has delivered double-digit pre-tax margins in each of the last four years, while Spirit only fell short of that feat in 2010. High margins provide a buffer, which can ensure that Allegiant and Spirit remain profitable despite volatility in economic conditions and fuel prices.

Furthermore, both companies have delivered strong earnings growth recently. Allegiant posted a 58% increase in EPS last year, allowing the company to eclipse its EPS record from 2009, when fuel prices were much lower. On average, analysts expect EPS growth of more than 30% at Allegiant this year. Meanwhile, Spirit grew net income by more than 40% last year, and is expected to post similar improvement this year.

A long track record of profitability, strong pre-tax margins, and earnings growth are all attributes sought by investors. For long-term investors, these characteristics could make Allegiant and Spirit great stocks to buy.

How do they do it?
While Allegiant and Spirit have different business models, there are a few common elements that unite them. First, the low-fare/high-fee structure takes advantage of human psychology (the "foot-in-the-door" technique) to get potential customers interested in a leisure trip before revealing how much it will actually cost after fees.

Second, they have focused on keeping unit costs as low as possible. Both carriers utilize dense seating configurations compared to other airlines, which reduces fuel and pilot costs per seat. Spirit reduces fleet costs through high utilization of its planes, while Allegiant minimizes those costs by buying used aircraft at a big discount. The result of these initiatives is a big cost gap between Allegiant and Spirit and the rest of the industry. Third, Spirit and Allegiant have shown a willingness to drop underperforming routes. Since they do not utilize "hub-and-spoke" route networks, the two carriers have no temptation to maintain routes that are not meeting profitability goals. This is especially true because both companies have numerous expansion opportunities; there are plenty of new markets where "wasted" capacity could be profitably deployed.

Foolish bottom line
Allegiant and Spirit are two of the most promising companies in the airline industry. While both trade at a premium to other airlines -- at 14.7 times forward earnings and 11.5 times forward earnings, respectively -- they are still good stocks to buy because of their superior financial performance and significant growth opportunities.

Allegiant and Spirit have industry-leading cost structures, and have a consistent record of driving enough traffic through their low-fare offerings to make a nice profit. The only potential threat to them is a future start-up, as today's competitors cannot compete with them on price. However, there is plenty of demand for low-cost air travel, so the possibility of new competitors entering should not be too worrisome. All in all, investors who buy these stocks today and hold them for at least five years are likely to achieve nice gains.