Way back in Jan. 2006, fast-food behemoth McDonald's (NYSE:MCD) spun off Chipotle Mexican Grill (NYSE:CMG) in an IPO, saying it wanted to concentrate on perfecting its core business.

Of course, both companies have performed admirably since then, with McDonald's stock nearly tripling while shares of Chipotle have risen more than sevenfold.

So which is the better buy today?

The case for burritos and beer
On one hand, it'd be easy to say Chipotle stock looks expensive at nearly 41 times trailing earnings and 30 times next year's estimates. Then again, the company just popped 10% after it posted an absolutely delicious quarter, which went a long way toward dismantling Chipotle's bear thesis. In addition, Chipotle still boasts strong returns on capital of 22.7%, generates tons of cash from operations, and has $700 million in cash with no debt on its balance sheet.

What's more, after opening 48 new restaurants last quarter, Chipotle had a total of "only" 1,458 locations in the U.S. While that may sound like a lot, consider McDonald's had closer to 14,000 domestic locations alone, with more than 34,000 total restaurants in 118 countries around the world. As a result, it's evident Chipotle's potential for growth far outweighs that of McDonald's.

And that doesn't even account for yet-to-be-realized growth with Chipotle's new ShopHouse Asian Kitchen concept, which currently only has three total locations between California and Washington, D.C., with a fourth on the way in Hollywood. While ShopHouse will certainly have its work cut out for it competing with the more than 1,500 fast-casual Panda Express restaurants, the folks at Chipotle have said early positive consumer feedback has encouraged them to continue growing the ShopHouse brand.

Finally, Chipotle has an almost fanatical focus on providing higher-quality ingredients through its "Food With Integrity" campaign, with which the company pursues "the very best ingredients raised with respect for the animals, the environment, and the farmers." This is an advantage that cannot be overstated when comparing Chipotle's ingredients to the perceived unhealthy wares offered by its larger fast-food kin.

The case for the Golden Arches
McDonald's, on the other hand, has also taken a number of steps to make its menu healthier, including recently introducing breakfast items like the Egg White Delight. However, as fellow Fool Brian Stoffel pointed out recently, the long-term positive effects of the healthier-food movement on the fast-food industry have been minimal so far.

In addition, while both companies have struggled to cope with higher food costs, McDonald's larger menu and dedicated customer base also afford the massive company better flexibility to tweak its menu offerings to offset those costs. Meanwhile, Chipotle's comparatively streamlined menu and generally higher price points limit such flexibility.

McDonald's stock also hasn't had any problems succeeding in spite of the increasing number of healthier competitive restaurants. And while Chipotle may enjoy greater overall growth potential, McDonald's stock pays a solid 3% dividend and, for volatility-averse investors, doesn't fluctuate wildly as evidenced by its incredibly low beta of 0.34. The two companies' performance since 2006 illustrate the volatility point nicely: 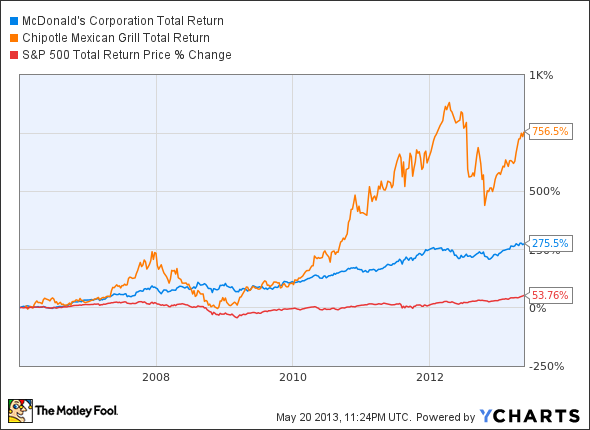 When the rubber hits the road, McDonald's stock may be a much better fit for your investing needs if you can't stomach the roller-coaster ride offered by Chipotle.

In the end, though -- and only if you can handle those wild fluctuations -- I'm still convinced Chipotle's long-term growth and healthy balance sheet make it the better stock for patient, long-term investors who buy today.