The commonly accepted wisdom in the cigarette industry goes something like this: Smoking is in decline in the United States. Therefore, if you want to make money on tobacco, you must look abroad. You must buy Philip Morris International (NYSE:PM) stock.

The problem, though, is that this commonly accepted wisdom is dead wrong. Tobacco investors can do quite well by buying a domestic cigarette business. In contrast, Philip Morris stock is looking overpriced today, and unlikely to outperform going forward. Why?

Philip Morris stock is at the bottom of the pack

Worse, when you lay the three companies side by side, you can plainly see that Philip Morris generates far less real cash profit than does the less popular Lorillard. As a matter of fact, its free cash flow yield is even a skosh smaller than that of Altria itself! 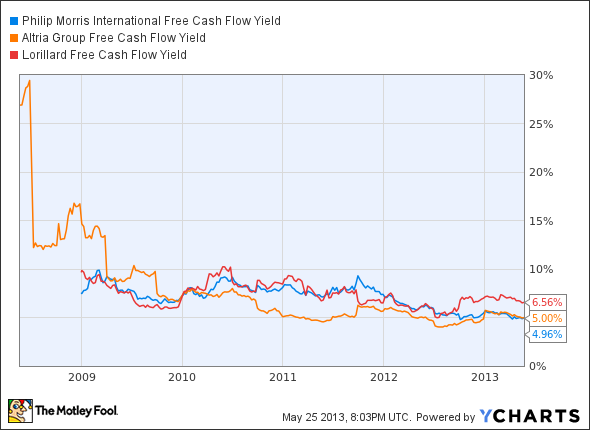 Second verse, same as the first
Of course, there's still the old investing truism to consider -- that investing isn't about what a stock has done in the past, but what it might do in the future.

Problem is, the advantage in growth rates that Philip Morris stock currently enjoys over its competitors is actually shrinking. From 226 basis points in "extra growth" versus Lorillard in the past five years, for example, it's expected to contract to an advantage of only 158 b.p. in the next five years: Now, is this continued advantage in growth rates still big enough to justify paying four P/E points more for Philip Morris stock than a share of Lorillard costs? Maybe not, once you consider one final fact: What Philip Morris stock owners gain in added earnings growth, they give up in reduced dividend yield.

That's because faster-growing Philip Morris is actually a stingier dividend payer than either of its rivals. Lorillard shareholders, for example, receive a whopping 5% dividend yield on their shares, while Altria shareholders collect a nearly as good 4.8% yield. Philip Morris stock, in contrast, pays a relatively meager 3.6%.