In April, the automotive industry's seasonally adjusted annual rate of sales, or SAAR, dropped below 15 million for the first time this year. When sales numbers came in at 14.9 million for the month, some investors began sounding warning alarms that vehicle sales could be in for a decline for the rest of 2013. I didn't buy into those headlines, and it looks like strong sales are here to stay. May sales bounced back to 15.3 million and the graph below shows recent strength in SAAR numbers. 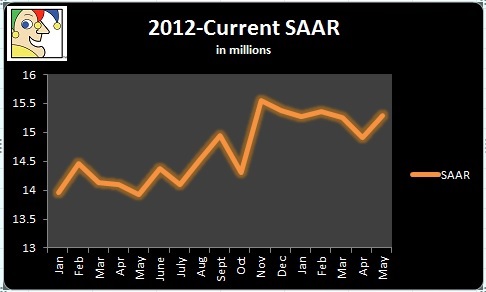 Ford (NYSE:F) had an excellent month, and there were bright spots for its crosstown rival General Motors (NYSE:GM). Let's take a look at some of last month's biggest winners.

Winner, winner!
The industry grew 8% in May led by Nissan, Ford, and Chrysler which gained 25%, 14%, and 11%, respectively. Those trailing industry growth were Honda (NYSE:HMC) and Volkswagen at 5% and 4%, respectively. Even further behind were Toyota (NYSE:TM) and General Motors, reporting 3% gains.

Nissan's jump was largely due to a strong May from its recently redesigned Altima, Pathfinder, and Sentra models. The percentage increases for those models were 41%, 293% and 65%, respectively. While the large percentage jumps are nice to cover in press releases, in reality only the Altima broke the top 20 in U.S. vehicle sales. Nissan's best-selling model managed to come in fifth, selling just under 32,000 vehicles.

Overall Ford was a big winner in May with its most profitable line, the F-Series, notching a 31% gain over last May and topping 70,000 for the first month since March 2007. That's pretty impressive on the eve of GM launching its 2014 Silverado. Below is a graph highlighting monthly F-Series sales, not cumulative, and the red line represents what Ford considers a good month in sales -- 50,000. 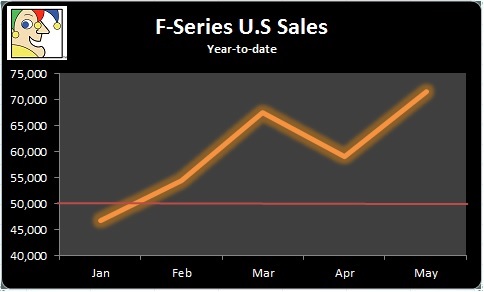 Ford's Fusion and Escape have set record monthly sales for four straight months and have become Detroit automakers' two top-selling cars. In May both models topped 29,000 in sales and ranked in the top 10 for vehicles sold in the U.S. If you look at total vehicles sold year to date, Ford owns a third of the 12 top models – more than any other manufacturer.

GM's Silverado was its only vehicle to break the top 10 in U.S. sales, but managed to grab the second spot – trailing only the F-Series. While its 25% increase compared to last May is nothing to sneeze at, it still trails Ford's F-Series by about 100,000 vehicles this year. GM hopes to bump up its sales numbers when its redesigned 2014 Silverado makes an impact this summer.

Cadillac was really GM's bright spot for the month, and for the year. Cadillac sales were up almost 40% for the month and 36% for the year. GM still is significantly behind rival Ford in its operating efficiency and margins. In time, as those improve, and as both the Cadillac line and full-size pickup sales improve, it will help GM become more profitable – something investors have been long awaiting.

Similar to Nissan, Cadillac's recent surge has been from success of its new vehicles – the ATS and XTS sedans. This is good news for GM's big picture as it plans to refresh, redesign, or replace 90% of its vehicle's by 2016. Recent success of the ATS and XTS give investors hope that the rest of the vehicle portfolio will be as well-designed and successful as its recent launches.

Bottom line
It appears that April's dip in SAAR numbers was just a minor speed bump for the industry. In fact, Ford announced that its production in the third quarter will be raised 10% compared to last year, signaling that management believes sales will remain strong throughout 2013.

Right now losses from operations in Europe are plaguing automakers, but if those losses are mitigated, expect strong second-quarter earnings reports from major automakers – especially Ford – and continued strength throughout 2013.

Those were May's winners, but which will be long-term winners? If you're interested in using the surging U.S. and global automotive rebound to boost your portfolio gains, look no further. The Motley Fool's brand-new free report highlights two major auto investments that could pay off big in the future.