Keep your lights on and your fridge open if you know what's good for your investments. According to a recent report, electricity demand growth is dropping – fast. Let's take a look at the numbers, and whether this report is fuel on the fire for this overvalued sector.

Going, going, gone
In the 1950s, the U.S. experienced electricity demand growth rates of 10%. That's greater than China's current GDP growth  and smacks of yesteryear economic prosperity, when Mr. and Mrs. Smith probably did leave their lights on.

Since 2000, electricity demand growth has averaged a minuscule 0.7% per year, and dropped into the red for the first time since WWII during the Great Recession. The Energy Information Administration's (EIA) projections for the next 40 years don't look any peachier. From now through 2040, annual growth rates are expected to hit just 0.9% a year, just over a third of our currently estimated GDP growth rate. 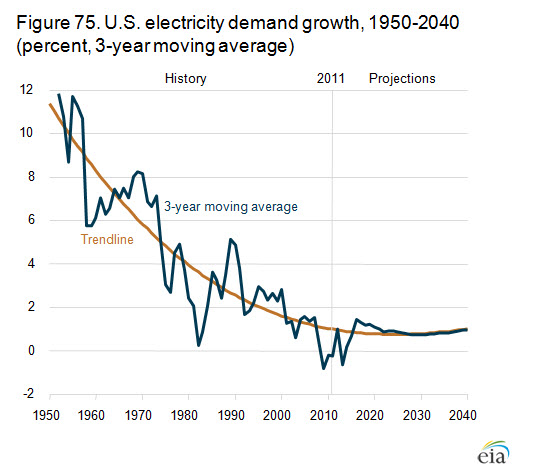 So why, then, have utilities stocks been skyrocketing over the last year? And why shouldn't investors be listening to overvaluation fears of utilities bears? In two words: creative destruction.

Growth isn't everything
The era of baby boomer electricity use is over, but utilities are making major moves to keep bottom lines intact as top-line growth fizzles. This is a good move for utilities everywhere. Electricity use comes and goes with economic fortune and failings, and the only way utilities can keep pulling profits is to improve their own efficiency.

Exelon (NYSE:EXC) is the nation's largest owner and operator of nuclear energy, with just over 19,000 MW of nuclear capacity comprising 55% of the utility's total energy portfolio. 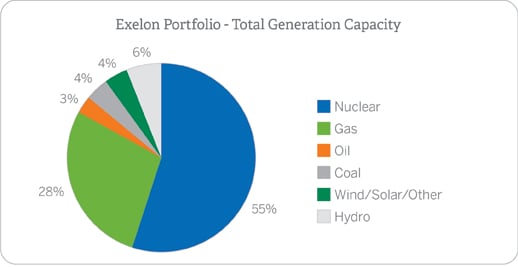 The company announced last week that it has filed renewal applications for two of its nuclear power stations, which collectively account for 13% of Exelon's overall capacity and 24% of its nuclear energy. The applications are likely to be approved, allowing Exelon to prolong the life of its current capacity without adding on unnecessary (and expensive) major new projects.

Similarly, Duke Energy (NYSE:DUK) recently announced that it would hold off on new North Carolina nuclear facilities the utility had previously been pushing. "Our most recent forecast indicates two additional nuclear units at Harris will not be needed in the next 15 years," noted Duke Energy President Dhiaa Jamil in a statement. Instead, the utility will continue to make the most of its $9 billion modernization project, which includes combined-cycle and "clean coal" plants.

More recently, improved technology and production tax credits have pushed power companies to ramp up their renewables efforts. It should come as no surprise that NextEra Energy (NYSE:NEE) is adding on to its 10,000 net MW of wind capacity with General Electric's  newest turbines, but other traditional companies are making the renewables leap, as well. Atlantic Power (NYSE:AT) bought a renewables business from Veolia Environnement in 2012 that added 150 net MW of wind to its power portfolio. With over 350 net MW of wind power and 195 MW of biomass under its belt, the "growth by acquisition" utility is trying its hand at renewable energy efficiency.

AEP (NYSE:AEP) was recently awarded accolades for the successful completion of its new 600 MW "clean coal" power plant. With a $1.7 billion price tag and seven years of regulatory battles to boot, this new facility promises to be the most efficient coal energy converter to date. Its "advanced ultra-supercritical steam cycle technology" will squeeze more from less, converting 39% of low-sulfur coal's energy into electricity.

Don't keep your lights on
Economic recessions are never a good thing, but in this case, it's caused power companies to take a critical closer look at their production processes. Whether it's improving efficiencies or carefully calculating new expansions, utilities know that less can still mean more.

And although annual growth rates clock in at just 0.9%, we would be terrible investors if we forgot the marvels of compounded average annual growth rates: by 2040, overall electricity use will still have increased 28%.  If you pick utilities that pull profits no matter how many lights get switched off, you'll have made your portfolio more sustainable by every standard.