CSX (NASDAQ:CSX) has undergone a huge transformation over the past decade, as the steep spike in energy prices sent railroads from being nearly obsolescent modes of transportation to being a key mover of goods during the commodity boom. Even after that boom paused during the 2008 financial crisis, CSX stock rebounded sharply from its declines and has recently approached all-time-record highs.

But CSX faces a major challenge: how to handle a struggling coal market. With its geographic proximity to major coal production areas like the Appalachian region, CSX has sought ways to make the most of a tough situation in coal while also branching out into other promising markets. Let's take a closer look at CSX to see why its stock has continued to pick up steam lately.

CSX is firing on all cylinders

The quarterly results that CSX reported back in April are indicative of the company's overall success lately. The company broke its own records for net income and earnings per share, with gains of more than 2% in earnings coming in well above expectations. Although revenue remained flat, CSX was able to boost its dividend by 7% and initiate a $1 billion buyback to take place over the next two years.

What's surprising about those results is that they came despite continued weakness in the price of coal. Although natural gas prices have risen somewhat, they still remain relatively cheap, supporting moves from utility and other major coal users to switch away from coal toward natural gas.

But CSX has responded to the coal crisis in a couple of ways. First, both it and fellow coal-focused railroad Norfolk Southern (NYSE:NSC) have ramped up their efforts to export coal, as countries such as China and India remain hungry for low-cost-energy alternatives. Peabody Energy (OTC:BTU) has a natural advantage in supplying Asia because of its deposits in Australia, allowing it to send coal to India and China more cheaply than its peers, especially those with extensive deposits in the eastern half of the U.S. But even eastern producers have managed to boost their exports considerably, and that's helping the railroads that serve coal companies.

Perhaps more importantly, CSX and its peers have also benefited from the huge demand in moving petroleum and other energy products from new unconventional shale plays. Union Pacific (NYSE:UNP) has been a pioneer in this regard, with plans to spend a quarter-billion dollars on tank cars and other assets to help it move crude out of underserved areas without pipeline coverage, most notably the Bakken in North Dakota. With major refinery companies like Phillips 66 willing to enter into long-term arrangements with producers in the Bakken and other mid-continent plays in order to secure cheaper oil than it can get from international sources on the East Coast, there's plenty of opportunity for CSX to get its share of this growing market. CSX hasn't hesitated to jump on that opportunity, with plans to spend $2.3 billion on infrastructure improvements to its rail network to move anticipated higher volumes of goods.

Why CSX?
Obviously, CSX isn't the only company in the railroad business. But because of its coal woes, the company has commanded a relatively low valuation lately compared to all of its peers other than Norfolk Southern: 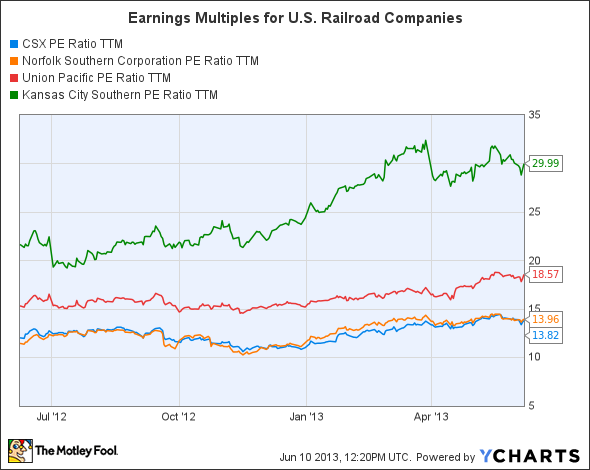 So if you're looking to capitalize on the opportunity that railroads are offering right now, CSX stock looks like an attractive way to benefit. Even with the stock near all-time record highs, CSX has plenty of upside potential if it can realize the full extent of its ambitions.

Click here to add CSX to My Watchlist, which can find all of our Foolish analysis on it and all your other stocks.