When World War II ended, policymakers feared the economy would slip back into the Great Depression. In 1947, the Council of Economic Advisers warned President Truman of "a full-scale depression sometime in the next one to four years."

Something had to be done to fight that risk. With Europe and Japan in ruins, exports couldn't be counted on. We had to use our own people. And we had millions of demobilized soldiers who could do just the trick -- so long as we turned them into consumers.

Which is what we did. Every conceivable policy was created to help people consume, often with credit. Interest became tax-deductible. Mortgage lending was loosened. Consumer credit for everyday purchases went mainstream.

It worked. Household debt ballooned sevenfold between 1949 and 1968. But most Americans' incomes rose, too. The household debt-to-income ratio stayed mostly flat during that period.

That changed in the 1980s. Incomes began stagnating, but debt kept on rising. People didn't want to give up their spending even if their incomes weren't growing, so they just wracked it up on debt.

For most of the 2000s, the bulk of that debt came from one place: homes. Home equity lines of credit exploded as people used their homes as ATMs.

You know how that story ended.

But things are changing, fast. Mortgage equity withdrawal has been sharply negative since 2008, and it shows no sign of turning positive: 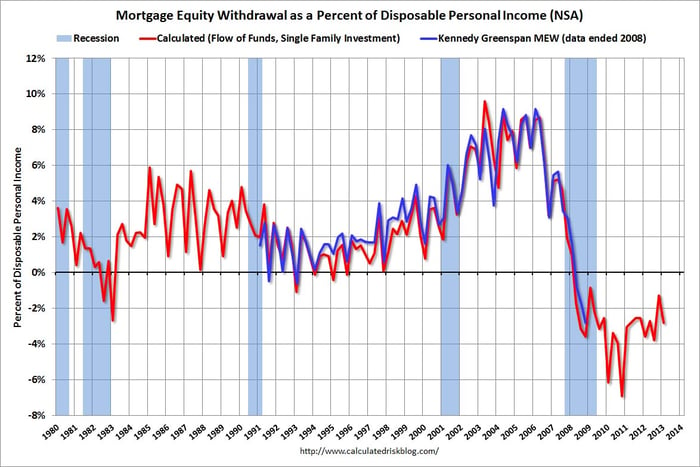 This is occurring because 1) mortgages have been defaulted on and written off in short sales, and 2) mortgages are being paid down faster than they need to be.

Regardless of the reason, this is what a complete shift in a cycle looks like. For decades, a home was something that pushed people into ever-growing amounts of debt. For the past five years, mortgage debt has consistently fallen. Banks like Wells Fargo (NYSE:WFC) and JPMorgan Chase (NYSE:JPM) earn fees on refinancings and new mortgage originations, and thus still earn a handsome return from the market. But there is no doubt that we have seen a paradigm shift in the way Americans think about debt -- probably for the first time since the end of World War II.