A historic look at the Corvette Lineup. Photo: General Motors.

Only a few special vehicles can reach the legendary status of an iconic American muscle car. Those special rides give the brand what is called a "halo" vehicle -- a unique ride that draws consumers to the dealership. Because of the attention those vehicles garner, they mean much more to the brands than the sales they produce.

In that elite group are muscle cars such as Ford's (NYSE:F) Shelby Mustang and General Motors' (NYSE:GM) Chevy Camaro and Corvette. There's been a lot of hype surrounding the redesigned 2014 Chevy Corvette, but does it live up to the lofty expectations? More importantly, is GM screwing it up by not allowing every dealership to have its halo vehicle? Here are the details, and what it means for consumers as well as GM investors.

Expectations and overview
"The convertible has been a part of the heart and soul of Corvette since the very beginning in 1953," said Ed Welburn, GM vice president of global design. "With the all-new Corvette Stingray, we designed and developed the coupe and convertible simultaneously. As a result, the Corvette Stingray offers an open-top driving experience with no compromise in performance, technology, or design."

As Welburn mentioned, there's no sacrifice in performance, as the 2014 Corvette stingray is estimated to put out 450 horsepower and 610 newton meters of torque. If you're comparing, that makes it the most powerful standard Corvette in its long history.

All the horsepower is produced by the Corvette's 6.2L V8 engine, and its advanced combustion system obviously commands enough raw power and torque to embarrass any tricked-out Honda Civic rolling around your neighborhood. On top of embarrassing Fast and Furious wannabes, what's even better about this generation of Corvette is the interior design.

While the outside of the Corvette has always screamed for attention with its aggressive styling, the interior design left much to be desired. With years of complaints from consumers and critics alike, Chevy designers finally placed the bulk of their attention on the interior issues. Consumers can rest assured that the interior is much improved. The interior offers carbon fiber and aluminum trims with hand-wrapped leather.

You can see the dual 8-inch infotainment screens that feature the Chevrolet "MyLink" system. The interior also boasts a nine-speaker Bose audio system that's typically found in luxury models. Here are some of the other features for standard models, not including premium options.

While those features aren't necessarily anything to write home about, the premium features listed on the Corvette website are impressive -- you just have to pay up for them.

"The 2014 Corvette Stingray perfectly embodies Chevrolet's mission to deliver more than expected for our customers," said Chris Perry, vice president, Chevrolet marketing. "The Corvette Stingray delivers a combination of performance, design, and technology that very few manufacturers can match, and none can even come close for $52,000."

Investing takeaway
Ultimately, this is the most complete, powerful, and aggressive styled Corvette in history -- offering a big bang for your buck. That said, will it be enough to salvage the drastic decline in sales? 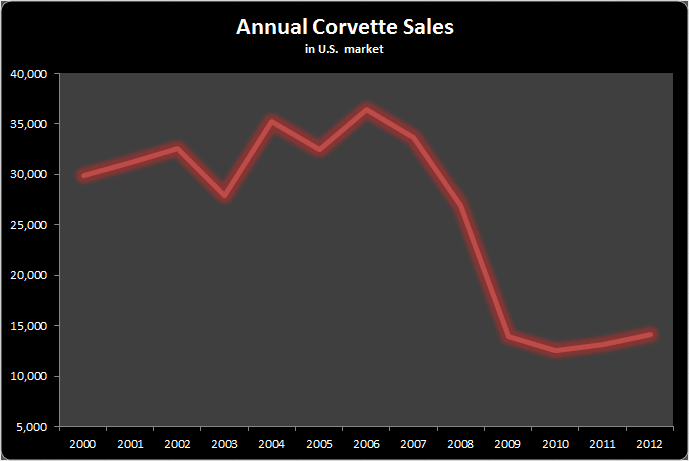 Only time will tell if the sales rebound, but I'm skeptical that the much-hyped 2014 Corvette will do anything for GM's top or bottom lines. Moreover, there is a big hiccup in the plans for GM's halo car: Not all the dealerships are getting the vehicle. What's the point of a halo car if you can't have one sitting at every dealership to draw in consumer traffic?

Chevy has a list of requirements for dealers to meet before receiving the Corvette's, and only about one-third of dealers are going to qualify when sales begin in the third quarter, according to Edmunds.com. After nearly a year, and jumping through hoops of buying special tools and additional training, the rest of the dealers should be eligible to sell the flashy ride -- but it won't be without many ruffled feathers and tested dealer relations.

The seventh-generation Corvette is a unique specimen, to be sure, as well as a powerful iconic ride. It's not enough for me to move past a test-drive, if it's even available at a location near me. What about you? If the newly designed Corvette going to be parked in your garage, tell me why in the comments below. I'm curious.