While speculating on commodities is simple, in that the price rises when there's more demand than supply, the problem is that you're competing against large industry insiders who have deep inside information. The largest insiders of all can move prices on their own, and there are tons of outside events that can move supply quickly. Basically, it's nearly impossible for a retail investor to get an edge in commodities markets.

That's why oil ETFs are for speculation and hedging, not for investment.

Ben Graham, the father of value investing, defined an investment operation as "one which, upon thorough analysis, promises safety of principal and an adequate return." Further, he said, "Operations not meeting these requirements are speculative."

Futures specify a delivery date for the underlying commodity, which means if you hold the contract on the day it expires, you have to take delivery of the commodity. To avoid taking delivery, the ETFs sell the contracts as they get close to coming due and buy new contracts with delivery dates a few months out. This process is called "rolling," and it incurs a cost on the ETFs. Over time, it leads to a divergence between the ETF and the underlying commodity. Take a look: 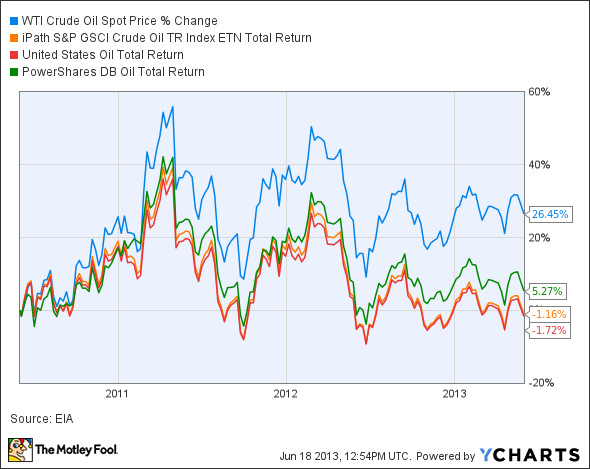 While West Texas Intermediate crude was up nearly 26% over the past three years, the oil ETFs tracking crude oil all underperformed oil by a significant margin.

But if you're still set on speculating on oil prices, there are multiple exchange-traded products to let you do just that. Let's examine the top five by assets.

1. The largest crude oil ETF is United States Oil Fund (NYSEMKT:USO), with $844 million in assets under management. This fund tracks the daily percentage change in the price of West Texas Intermediate light, sweet crude oil and charges 0.45%. The fund invests in short-term contracts and "seeks to manage its portfolio such that the average daily changes in its NAV over any rolling 30-day period is within 10% +/- of the average daily change in the price of the benchmark."

2. The PowerShares DB Oil Fund (NYSEMKT:DBO) , the second largest crude oil ETF, packs $407 million in assets under management. The fund tracks the DBIQ Optimum Yield Crude Oil Index Excess Return, which is "a rules-based index composed of futures contracts on light sweet crude oil (WTI)." The fund charges 0.75% and has had a total expense ratio of 0.79% over its lifetime.

3. The third largest crude oil exchange-traded product, but not an ETF, is the iPath ETN S&P GSCI Crude Oil Total Return Index (NYSEMKT:OIL) with assets under management of $320 million. An ETN, or exchange-traded note, is a debt security through which the issuing party promises to pay the holder based on a predetermined benchmark, whereas ETFs actually own the underlying securities that the funds are meant to track. With an ETN, if the issuer goes bankrupt, ETN holders will probably receive nothing for their holding. That's not normally an issue, but if we should ever meet with another financial crisis, ETN holders should make sure that the issuer -- in this case Barclays Bank -- remains healthy.

4 and 5. Both of the last two ETFs are levered ETFs that track two times the single-day return of the Dow Jones-UBS WTI Crude Oil Subindex. The important thing here to understand is the compounding effect that a two-times daily leverage has over time. With a volatile market and with a resetting of leverage every day, levered ETFs are bound to underperform crude oil over moderate timeframes. Unless you're a day-trader, these ETFs are probably not for you. 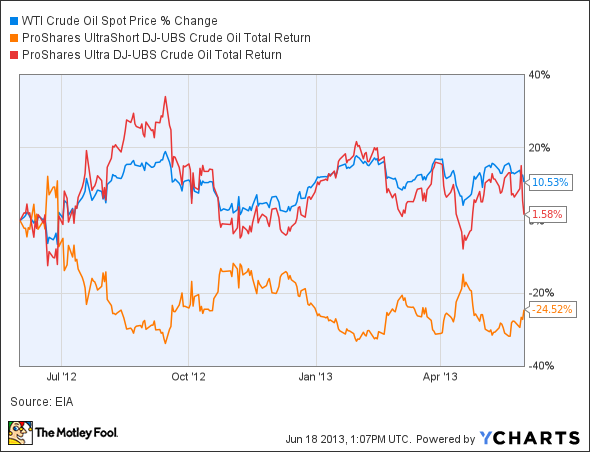 The fourth largest crude oil ETF is the ProShares Ultra DJ-UBS Crude Oil (NYSEMKT:UCO), with assets under management of $230 million. It seeks to correspond to twice the daily performance of the Dow Jones-UBS WTI Crude Oil Subindex. Finally, the ProShares UltraShort DJ-UBS Crude Oil (NYSEMKT:SCO), the fifth largest, with assets under management of $205 million, seeks to correspond to negative-two times the daily performance of the same subindex.