Netflix (NASDAQ:NFLX) has been a poster boy for market success in 2013. The stock has gained 134% in value during the first six months of the year and is one of the strongest performers outside of ultra-risky penny stocks. The digital video maven earned it by collecting more than 30 million domestic customers and more than 7 million viewers abroad, while also producing high-quality original shows and locking up even more third-party content deals.

As successful as Netflix stock has been this year, it's not the biggest winner of all. In fact, it's just the 15th strongest performer among reasonably sized Russell 3000 members. Let's take a closer look at four of the stocks that managed to outperform Netflix so far, using the video veteran as the benchmark to beat. 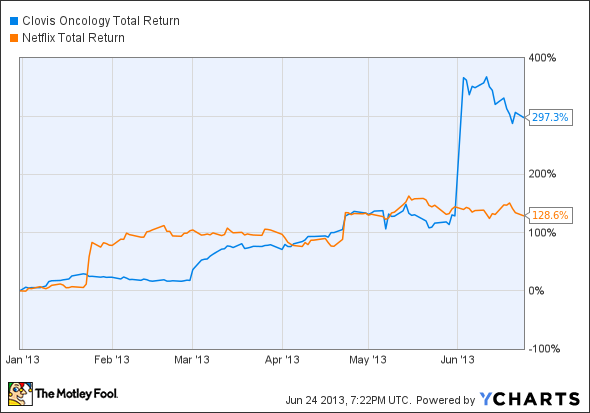 No. 1 with a bullet
Nobody, but nobody, is beating Clovis Oncology (NASDAQ:CLVS) right now. The cancer-focused biotech company got the party started with a fine earnings report in February, which helped push the stock 15% higher overnight. But that's nothing next to the 136% one-day pop Clovis experienced after releasing positive data from early-stage studies on two types of cancer-busting drugs.

Those are the breaks with small-cap biotechs. One day, you're trading sideways for 12 months thanks to a couple of high-profile FDA rejections. Six months later, you're the biggest winner on Wall Street. Clovis shares have more than quadrupled in value this year. 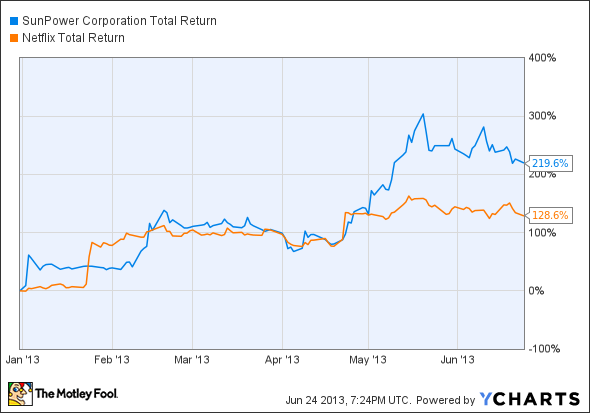 On the sunny side of the Street
California-based solar power expert SunPower (NASDAQ:SPWR) delivered a triple to shareholders on the back of two important factors. For one, SunPower's solar cells deliver the highest efficiency in the solar industry. That's becoming a huge competitive advantage as eco-conscious customers search high and low for the most efficient panels.

For another, the company sits on a downright pristine balance sheet compared to other major players in the solar industry. Both investors and customers reward that fiscal stability with premium prices on shares and products alike. 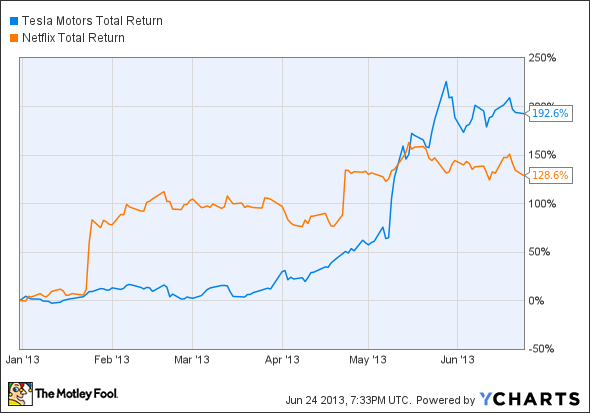 Full steam ahead!
Electric vehicle builder Tesla Motors (NASDAQ:TSLA) is next on my list with a near-triple performance in 2013. The big surge on this chart comes in early May, when the company reported its first honest-to-goodness positive earnings and repaid its modest government stimulus checks ahead of schedule.

Tesla benefits from hefty tax breaks on account of its core product's eco-friendly focus. That's an important ingredient of the secret sauce that keeps its electric sedans within reasonable prices for a luxury car brand, despite the lack of economies of scale you'll see at Mercedes or Audi. 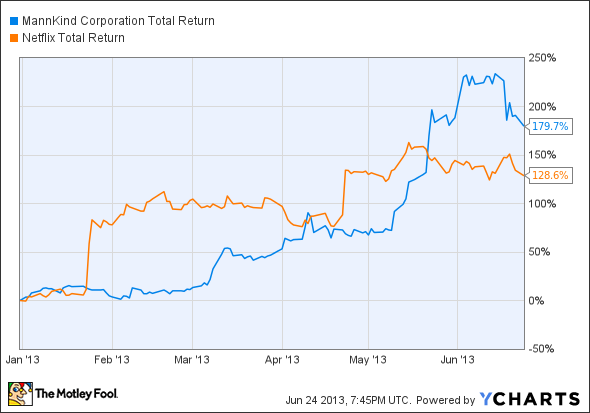 Going full circle
There's nothing new under the sun, right? My last pick of Netflix beaters is another drug developer with a yen for cancer treatments -- with a twist. Say hello to diabetes and cancer researcher MannKind (NASDAQ:MNKD).

MannKind's big, huge soaring leap in May had nothing to do with solid FDA approvals, like Clovis' major catalyst. Instead, it rested on circumstances like an optimistic analyst report and incessant rumor mill chatter around diabetes drug Afrezza. This run was the epitome of speculation.

Granted, it all seems to work out as the Afrezza study results started dropping in a couple of weeks later without dire warnings attached. The trials are completed and reported -- but we're still waiting for the actual results, not to mention the FDA's take on them. Buying MannKind right now would be a huge gamble as the stock has surged 180% in six months and 211% over the last year with very little solid support from actual business results.

Back to the lab again
These four stocks all outperformed market darling Netflix in the first two quarters of 2013. SunPower and Tesla appear to have plenty of business-class support for their huge runs, and I like Clovis' chances of reaching the market with several types of cancer treatments.

But it's not all upside and rainbows. Clovis and MannKind still depend on the unpredictable favor of the FDA. Tesla has barely broken through to profitable operations and still depends on those huge tax breaks. SunPower works in another risk-fraught industry, and its fundamentals are only strong in relation to sector rivals -- did I mention that the company isn't profitable today and sits on more debt than cash?

For my money, I'd be surprised if any of these stocks still outperform Netflix at the end of the year. For all of its perceived flaws, that's one long-term growth story I can get behind.