With global markets' concern shifting from the Fed to China's central bank yesterday, the People's Bank of China responded today with some reassuring noises, according to which "liquidity risk in the banking system is under control" and, better yet, "we will stabilise market expectations and guide market interest rates to reasonable levels."

That appears to have been enough to calm world markets, including the U.S., where the S&P 500 (SNPINDEX:^GSPC) and the narrower, price-weighted Dow Jones Industrial Average (DJINDICES:^DJI) are up % and %, respectively, at 10:10 a.m. EDT. However, China's overnight repurchase rate remains elevated at 5.8% -- not far below the overnight dollar London Interbank Offered Rate's all-time high of 6.875%, achieved at the height of the credit crisis in September 2008. For more on this situation that bears watching, I recommend "China's Ponzi Credit Boom Faces Crunch" (requires subscription) from UBS' excellent George Magnus.

Regular readers of this column know I've been warning investors that the junk-bond market looked dangerously overheated. The correction we're now witnessing suggests that was indeed the case. The yield on the Bank of America Merrill Lynch US High Yield Master II Index jumped from 6.27% last Tuesday to 6.99% yesterday. However, the Fed's announcement seems only to have accelerated a process that began in May, as the one-year graph of the yield shows: 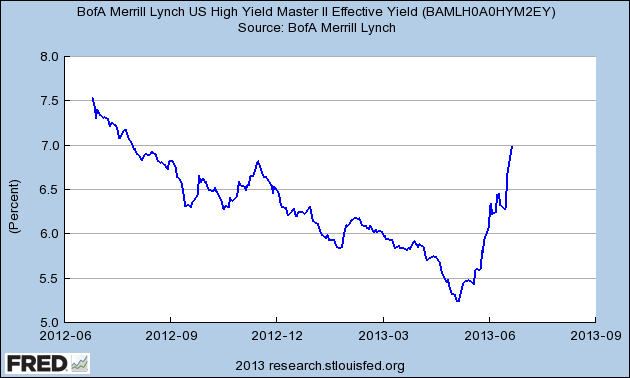 The yield has leapt from a low of 5.24% on May 8 to just less than 7% in less than two months. That's substantially more than the increase in the 10-year Treasury yield over the same period.

For the week ended June 19, Lipper's latest mutual-fund flows data shows investors pulled $333 million out of high-yield bond funds for a fourth consecutive week of net outflows. You can expect the week ending tomorrow to make that five; this correction has some room yet to run.