If you're like everyone else who is trying to beat the market, it's not always as simple as "buy low, sell high". If it were, we'd all be somewhere enjoying a nice adult beverage on some distant beach during our early retirement. I've followed the automotive industry for years and Detroit's Big Three automakers have come a long ways from the depths of the great recession, and if trends continue these could be very valuable investments for investors willing to put the past behind them. I'm going to list a handful of reasons that make Ford (NYSE:F) and General Motors (NYSE:GM) two automotive stocks worth a strong look right now.

Light-vehicle sales started off at a brisk pace in 2013, and have continued to improve. Just last week, LMC Automotive estimated June's sales would reach a seasonally adjusted annualized rate, or SAAR, of 15.7 million units. That's the best month SAAR we've seen since December 2007. Below is a look at the recent SAAR, and you can see where the estimated 15.7 million mark would fit in. 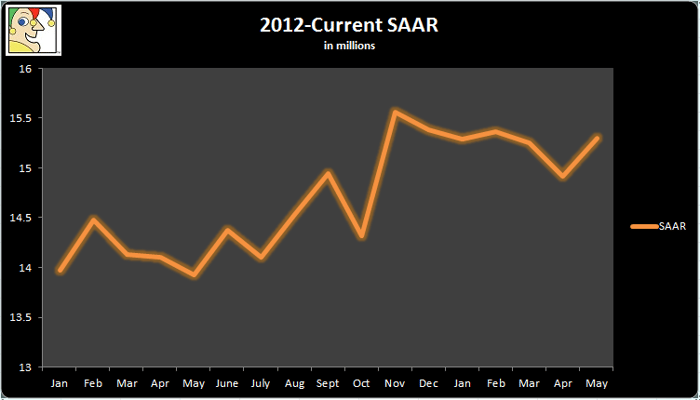 "There is little question that the automotive market has strong momentum as we close out the first half of 2013," Jeff Schuster, LMC's senior vice president of forecasting, said in a statement to Automotive News. "Looking forward, all the key fundamentals are in alignment to continue the current growth trend, with production capacity limitations being the only major visible risk."

Towards the end of Schuster's statement he notes the only visible risk being capacity limitations. Yes, you heard that right: Ford and GM are actually having troubles producing enough vehicles to meet consumer demand. For instance, the plant producing the Ford Fusion is said to be running around 114% capacity recently, making each vehicle rolling off the line more profitable than the last. Having too little inventory might cost you some top-line revenue but will lead to surging margins and profits, maybe visible as soon as Ford's second quarter.

Full-size trucks
Speaking of margins, full-size pickups bring in huge margins for Detroit automakers. Analysts estimate each truck sold could bring in as much as $10,000 in profits and could represent as much as 60% of Ford and GM's bottom lines.

So if profits go the way truck sales go, things are looking phenomenal for these two automakers. There seems to be a perfect storm of factors contributing to the surging full-size truck segment, and it looks to continue.

Firstly, replacement demand will continue to be strong in the years ahead because the average age of trucks on the road is roughly 13 years – even higher than the overall industry average. Secondly, as construction continues to pick up from a gradual rebound in housing – as well as America's recent energy boom – full-size trucks will continue to be in demand. Lastly, analysts are even seeing a resurgence in overall truck popularity because of the increase in MPG makes it a viable ride for those who aren't in construction or hauling loads.

All of those factors have contributed to the large year-to-date sales increases recorded by the F-Series, Silverado, and Ram at 21.7%, 23.9% and 22.7%, respectively. If you look at the graph below, there's still plenty of room for growth. 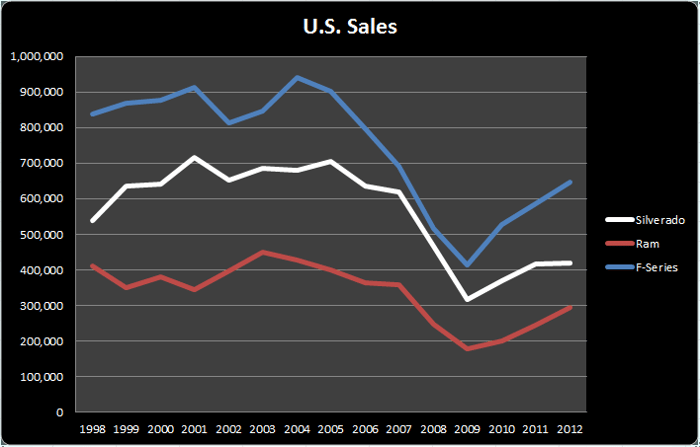 Global expansion
Two of the biggest boom and bust scenarios for Ford and GM are found in Europe and China. Europe's outlook is dismal and both Ford and GM expect massive losses this year – Ford is expecting to lose as much as $2 billion. However, the situation is similar to what we saw in the U.S. during the financial crisis and both automakers are exporting their hard-earned lessons to Europe to quickly minimize losses. Both companies expect to break even in 2015, which could reverse billions of dollars of losses and instantly boost bottom-line earnings and stock valuations.

China is the X factor in all of this. Last year vehicle sales in China hit 19 million, whereas Europe and the U.S. sold just over 12 million and 14.5 million vehicles, respectively. Analysts expect significant growth in China's vehicle sales – some estimates call for China to easily top 27 million vehicles sold by 2020. That's a huge jump when you compare most estimates; expect Europe and the U.S. to reach levels just over 15 million and 17.5 million, respectively, in that same time period.

Bottom line
GM is already a dominant player in China, yet still plans to spend $11 billion in the region to secure its success going forward. Ford, which was late to the game in China, is spending nearly $5 billion and introducing 15 new models by 2015 – an attempt to double its market share.

Three to five years from now we could be witnessing Ford and GM return to profitability in Europe, boost revenues during China's surge in vehicle consumption, and drive home bottom-line profits in the U.S. with a strong full-size pickup segment. If that holds true, these will be two very attractive stocks to own.