Many analysts, myself included, assumed that Best Buy (NYSE:BBY) was as good as dead at the end of last year. Over the previous 12 months, its stock had lost half its value. A new CEO with scant retail experience was at the helm. And its founder was mounting an ultimately fruitless attempt to take the company private after being ousted from the board for failing to act upon the sexual indiscretions of a former CEO.

But the new year brought a new lease on life, and Best Buy has done everything in its power to capitalize on the opportunity. As the following chart shows, its stock has mounted an impressive rally since the beginning of January, more than doubling in value and thereby making it the top performing stock this year on the S&P 500 (SNPINDEX:^GSPC). 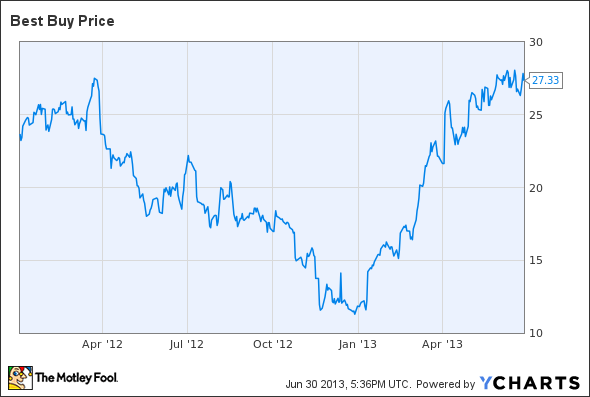 If you examine the price movements, you can see three distinct catalysts. The first came at the end of January, with the release of Best Buy's holiday sales numbers. For the last two months of the year, it reported essentially flat sales at its U.S. stores open at least 14 months. While that might not seem great, it nevertheless outperformed analyst expectations in light of the fact that its same-store sales had fallen for most of the preceding three years. On the heels of the announcement, shares in the company soared by 16.4%, its biggest single-day percentage gain in more than four years.

Roughly a month later, Best Buy one-upped itself by reporting better-than-expected fourth-quarter earnings. Even though it lost $409 million during the three-month period ended Feb. 2, the end result represented a dramatic improvement from the same time period the previous year, in which it lost $1.82 billion. And on top of this, it notched its first quarterly gain in comparable sales in more than a year. As its CEO, Hubert Joly, said at the time, "People who thought we were dead have to go through the painful process of revisiting that point of view."

And the final catalyst came at the beginning of April, with the announcement that it's partnered up with the South Korean electronics giant Samsung to install semi-autonomous boutiques featuring the latter's increasingly popular products. As The Wall Street Journal noted, "Best Buy has figured out what to do with some of the empty space in its cavernous stores: Turn it over to Samsung." The hope here is that the new stores will drive more traffic through Best Buy's stores, which can then be converted into sales. While I'm skeptical, and particularly of Samsung's decision to partner with an ailing bricks-and-mortar operation as opposed to just going it alone like Apple, even I can't deny the promise offered by this arrangement.

It still remains to be seen, of course, whether Best Buy can mount a sustainable recovery in the face of competition from online retailers and the growing digitization of its formerly lucrative music and DVD businesses. But one thing's for certain: It's certainly making a showing for the time being.