Apparently, oil and gas in the ground is worth next to nothing. At least that's what short sellers of BreitBurn Energy Partners (OTC:BBEP.Q) would have you believe after saying the company's units are worth as little as two dollars apiece. Here's the thing: Simple math shows that this isn't the case at all.

Before we get to that, a little background is in order. This attack is really just a continuation by the same short-sale firm that's been trying to take down LINN Energy (OTC:LINE.Q) and LinnCo (NASDAQ: LNCO). This company has gone on to say that BreitBurn is really just LINN Energy junior and that its distribution is "largely a mirage." The problem is that, other than the fact that it's just plain false, it's not giving BreitBurn much of any credit for the oil and gas it has in the ground. Those reserves are what matters most if you were to value the firm. That's why for base value the company's third-party-verified reserves are used, which total an estimated 149.4 million barrels of oil equivalent and are spread around the nation, as shown in the following map: 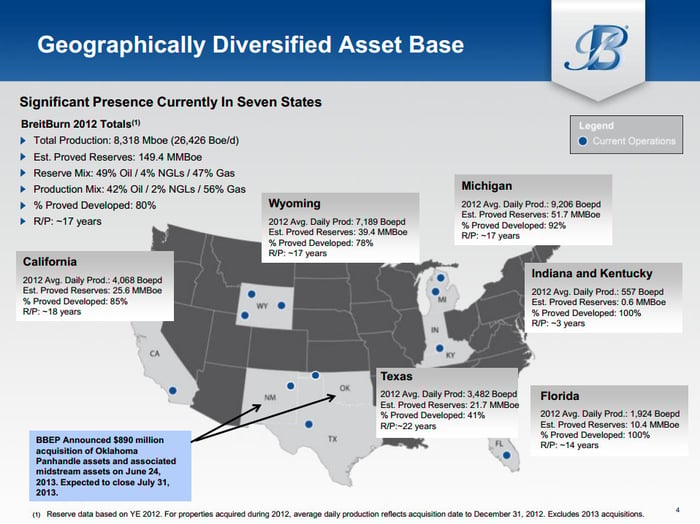 The most basic way to value an oil and gas company is to put a number behind its oil and gas reserves. The simplest way to do that is to go to its latest annual report and take a look at its PV-10, which is the present value of its reserves discounted by 10%. For BreitBurn, that number is $1.99 billion, which you can find on page seven of last annual report (link opens a PDF). If you are an investor in BreitBurn, that number is really the one that you simply must know.

What that number means is that if oil and gas prices stay the same, and if BreitBurn doesn't discover any additional oil and gas reserves, that's about what investors can expect the company to produce in future cash flow. It's in a sense the worst-case scenario of the future because when its oil and gas reserves are gone, investors won't be left with much else. It could be used as a rock-bottom valuation of the company, which makes BreitBurn worth much more than what short sellers would have you believe.

Here's what you might not know about BreitBurn's management team: They are very good at what they do. Not only that, but they tend to see things that most others miss. Just take a look at the following quote from CEO and co-founder Hal Washburn about the time when he and his partner started the company:

[We] had a theory, a thesis, that technology was going to allow us to increase recoveries of oil and gas and we thought that, it would work very well in the United States and that the exodus from United States by all the major oil companies in late 80's was a mistake. We felt that new technologies would allow us to continue to grow production here in United States and so we built the business on the back of that. We acquired interest in large oil and gas fields, embracing technology to increase the reserves, the production, the cash flow and therefore the value.

That's something that you simply cannot put a price tag on. However, I'll go out on a limb here and say that BreitBurn's worth a whole heck of a lot more than $2 per unit and likely worth a great deal more than the baseline $10.50 per unit in oil and gas reserves.

Unfortunately, as investors in both LINN and LinnCo have realized, the accusations that are being made are compelling enough to scare many investors. Given the double-digit loss that BreitBurn investors endured this week, the allegations against it are making investors sell first and ask questions later. That's really a shame because this is a great company with a great asset base that's worth far more than two bucks, and I'd venture to say its also worth far more than it's currently trading. That's not to say the company won't endure a rocky future, but those reserves are its solid ground.