With Apple's (NASDAQ:AAPL) recent $17 billion bond offering being one for the record books, there have been headlines covering how much credit investors are down on the Mac maker's paper. What's less covered is how Apple's own bond holdings may be faring, particularly in light of the Federal Reserve's recent confirmation that it's about to start pulling out of the bond market.

That news sent shockwaves through the bond market (along with the stock market), sending yields upwards. The rising yields and falling bond values have a big impact on Apple's total cash position, which generally includes its long-term marketable securities. Since a non-financial company's interest rate risk corresponds in large part to its bond holdings and Apple's cash investments have soared, the Mac maker could see its cash crushed by the Fed's move and the damage could easily amount to billions of dollars.

Straight from the Apple's mouth

Don't just take my word for it; Apple's 10-K estimates the total damage of a 1% parallel shift in the yield curve at $2.1 billion: 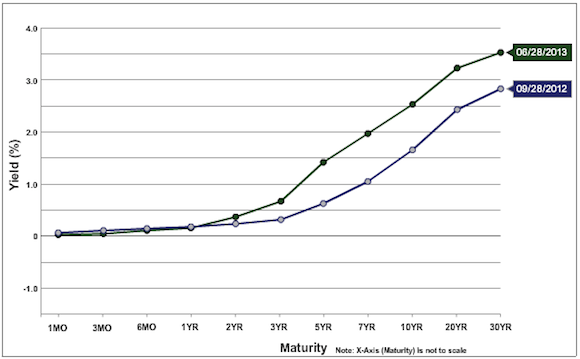 For the first six months, it was a fairly modest move upwards. 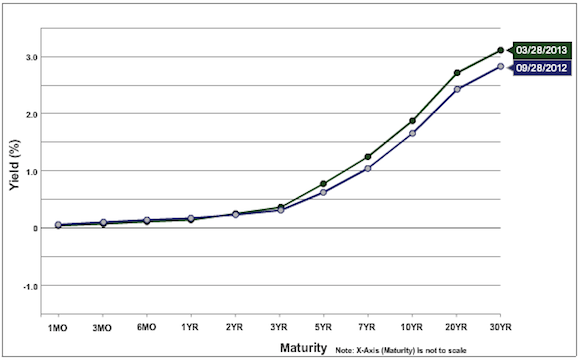 The following three months, which include the Fed's announcement, were the real kicker. 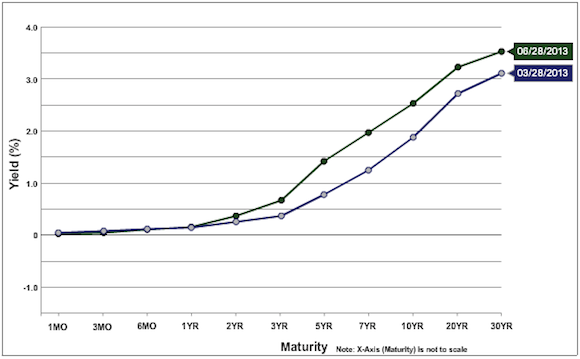 The bulk of Apple's cash is stashed in long-term securities, and the maturities of these securities are generally between one and five years; this is where Apple's interest rate risk is concentrated. Here's how those rates have changed since September.

Apple's long-term securities have increased from $92.1 billion in September to $105.6 billion in March, increasing its exposure. Investors don't get a detailed breakdown, but if Apple has concentrated holdings at the 5-year maturity it could approach the $2.1 billion potential loss estimate, particularly since its long-term investment portfolio has swelled by an additional $13.4 billion since September.

Where it counts
The company categorizes for its portfolio as available-for-sale, which means that securities are carried on the balance sheet at market value and unrealized fluctuations bypass the income statement and are instead recorded in other comprehensive income. In contrast, securities classified as held-to-maturity are carried at amortized cost and market fluctuations are ignored. Since Apple uses available-for-sale accounting, the declining value of its bonds could put a dent in its total cash position.

In a few weeks, Apple will report its latest earnings results through the end of June. Investors won't have to wait long to see how Apple's cash position has changed.

Of course, Apple's business isn't investing in bonds -- it's selling stuff. While the company's cash investments may lose billions of dollars in value because of market fluctuations, its operating cash flow will more than make up for it. For the first half of the fiscal year, Apple has generated $35.9 billion in operating cash flow, of which $31.2 billion is free cash flow. The Fed can't touch that figure.