Quick: If asked to name "the most profitable food producers in America," who would you think would win the title?

Based on the prices at Whole Foods Market -- where a recent shopping expedition revealed that a pound of nuts can easily cost you as much as buying a pound of Angus steak -- you you'd probably guess that organic foods are the most profitable. Or if you don't shop there, you might guess it's the companies that grow the expensive fruits and vegetables in your supermarket grocery section.

But a new report out of industry research firm IBISWorld shows that's not the case at all.

Turns out, many of the most profitable food producers in America are candy companies.

We won't keep you in suspense. Here are IBISWorld's findings, showing that out of the top 10 food producers in America, four of the top five are industries that produce sweets: 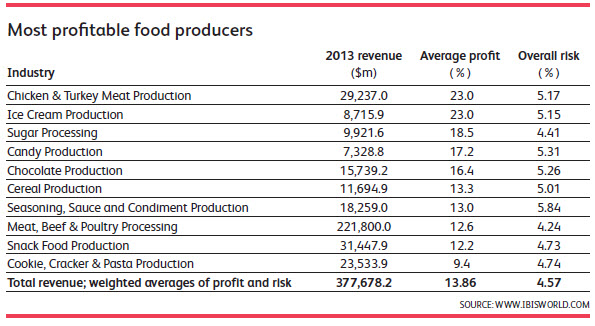 Now admittedly, this isn't the fact that IBISWorld focuses on in its report. Rather, the researcher emphasizes a growing trend of Americans who are becoming "increasingly concerned about the negative health effects of certain foods," growing more "health conscious," and "seeking out new and healthier versions from their favorite brands."

OK. Whatever. Yada, yada, yada. The granola crowd is certainly entitled to its opinion. But to any objective observer, the clearest fact that jumps out of this survey data has to be the prominent placing of "sweets" companies in the rankings.

The Centers for Disease Control say that 25.3 million Americans suffer from diabetes today and 79 million more are considered "pre-diabetic." Yet despite the obvious health hazards, four of the top five most profitable industries in America today are ice cream, sugar, candy, and chocolate. In a word: "sweets."

According to public figures, these confectionery companies earn operating profit margins as much as two-thirds above what's common elsewhere in the processed and packaged foods industry.

This raises an interesting question: Are these companies "tricking" Americans into eating sweets because it's more profitable for them to do so -- health risks notwithstanding? Or are they simply satisfying the cravings of America's national sweet tooth?

Risk and reward
The answer may appear in that column on the far right of IBISWorld's table: "Overall risk."

As the researcher explains, factors such as "demand from supermarkets and grocery stores and the price of commodities" all affect an industry's ability to continue earning strong profits. The volatile prices of sugar, and its corn-based counterpart, high-fructose corn syrup, contribute particularly to the above-average "riskiness" of confectionery businesses.

Granted, right now, corn prices are expected to decline at an annualized rate of 2.6%. Sugar prices, too, are said to be in a short-term downtrend. Still, given that most businessmen tend to shun risk when possible, given their druthers, companies in the food industry would probably prefer to sell less risky foodstuffs if they could get away with it.

This suggests that the real reason that "sweet" products are in high demand -- and produce correspondingly high profits for the companies that manufacture them -- is because they taste good.

Candy, ice cream, chocolate -- these things aren't popular and profitable solely because Hershey, Nestle, and Mars are flooding the airways with advertising, and telling people what to buy.

The truth is simpler than that: People like sweets. They like eating ice cream, candy, and chocolate -- and they're willing to pay for the privilege of getting what they want.

This suggests that the problem of dealing with rising obesity rates in America, and the epidemic of adult diabetes, won't be as simple to fix as simply slapping an embargo on Big Gulps as Mayor Bloomberg did in New York. On the other hand, it means investors don't necessarily need to worry that health-food fads will destroy demand for candy companies' products, either.