You couldn't ask for better timing. Wednesday marks preview night for San Diego Comic-Con, arguably the world's largest celebration of comics and pop culture. The festival lasts throughout opening weekend for both of these comics-sourced films.

R.I.P.D., short for "rest in peace department," tells the story of two deceased cops who return to the living world to protect it from evil spirits that refuse move on into the afterlife. Dark Horse Comics first published the four-issue miniseries from writer Peter M. Lenkov in late 1999. Jeff Bridges and Ryan Reynolds co-star in the film version, which cost Comcast's (NASDAQ:CMCSA) NBCUniversal a reported $130 million to produce. 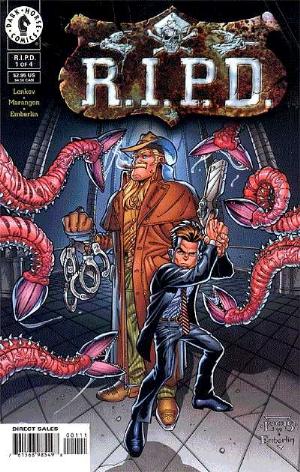 RED 2 is the star-studded sequel to the 2010 hit RED, also from Lions Gate (NYSE:LGF-A) and Summit Entertainment. It also marks the second comic book film this summer to be adapted from the work of writer Warren Ellis, who teamed with artist Cully Hammer to create the original "RED" miniseries for DC Comics imprint WildStorm in 2003. Which was the first? Iron Man 3. Ellis' "Extremis" storyline helped inform the plot line for the Marvel Studios blockbuster.

RED 2 features an ensemble cast of former intelligence operatives who are classified as "retired, extremely dangerous." Bruce Willis, John Malkovich, and Helen Mirren all reprise their earlier roles in the sequel, which cost a reported $85 million to make.

How well can Comcast and LionsGate investors expect R.I.P.D. and RED 2 to do next weekend? Google's Trends data isn't promising, unfortunately:

R.I.P.D. is barely registering while RED 2 is tracking even with low-budget flick The Conjuring, from Time Warner. Meanwhile, another family film -- Turbo -- appears headed for a big opening for 21st Century Fox (NASDAQ:FOX). So much for timing, eh?

The annual Comic-Con festival and its 130,000-strong celebration of comics and pop culture may still not be enough to keep R.I.P.D. from opening dead on arrival as RED 2 is taken out by Turbo's snail. Call it the dog days of comic book summer. Or just disappointing. Both films look entertaining enough to merit audience support.

Now its your turn to weigh in. Should Comcast and Lions Gate continue to invest in lesser-known comics properties, or is it best to leave the genre to Warner and Walt Disney? Leave a comment to let us know what you think.