Is the sun beginning to set on OPEC? Source: Chesapeake Energy

There are rumors floating around that OPEC might cut back on its oil production. This would be the first time in five years the organization has made a move to cut output; the last time corresponded with dropping demand as the global economy headed into recession. This time the move would be in response to growing oil production from North America, which has OPEC "concerned". With that as a backdrop, here's a look at five of the companies keeping OPEC up at night.

With U.S. oil supply up by more than 40% over the past five years, OPEC does have reason to be concerned. This supply boom has it projecting that demand for its crude will slide by 300,000 barrels of oil per day, or about 2.6% less. While that might not sound like a lot, at current oil prices, that is a potential revenue loss of $31,500,000 per day. That's money that can stay inside the U.S. economy as we've undergone a continental shift to the point where we produce more oil than we import.

One company leading the way is Continental Resources (NYSE:CLR). It's now the No. 1 oil producer in the Bakken with an emerging position in the Woodford Shale of Oklahoma. Combined, the company sees the potential to triple its oil production by 2017 to over 300,000 barrels of oil equivalent per day, or boe/d. Also, it expects to still have over 1.5 billion barrels of oil equivalent reserves from which it can produce well into the future. This is one reason why its CEO Harold Hamm believes the U.S. has the potential to overtake Saudi Arabia as the world's largest oil producer by 2017.

Continental isn't alone in its pursuit of the Bakken. Peers like Oasis Petroleum (NYSE:OAS) are also aggressively drilling in the region. Oasis has grown its oil production by 71% year over year and sees the potential for significant future upside as it drills on its current acreage over the next 14 years. Production growth at Oasis has been truly remarkable. In the first quarter of 2010, the company was producing just over 3,000 boe/d, but by the end of this year it expects to produce an average of 34,000 boe/d. That's a tenfold increase and certainly reason for OPEC to be concerned.

The great American eagle
While the Bakken gets most of the credit for our oil boom, a real production driver of late has been the Eagle Ford Shale of Texas. Take a look at the following chart to see why this play, and the companies that operate in it, are beginning to concern OPEC: 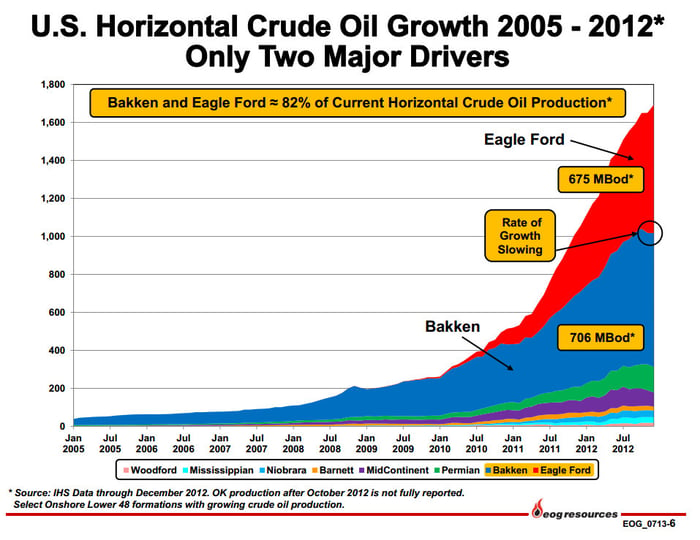 One of the leaders in the Eagle Ford is EOG Resources (NYSE:EOG), the largest producer in the play with production of 153,000 barrels of oil equivalent production per day as of the end of last quarter. The company estimates that it alone can capture about 8% of the estimated 26.4 billion barrels of oil equivalent that's in place. This gives EOG reason to believe it will be drilling on its Eagle Ford acres for the next 15 years, which will keep oil production in the U.S. not only flowing, but growing.

Another big Eagle Ford player is Chesapeake Energy (OTC:CHKA.Q). That play has helped the nation's No. 2 natural gas producer to grow its oil production by 22% year over year. Chesapeake sees the potential to drill about 3,500 future wells on the acreage it expects to retain in the Eagle Ford giving it a large growth runway over the next 10 years. This one play is really moving the needle for Chesapeake, which is why the company is devoting more than a third of this year's drilling budget to the play.

The Eagle Ford has also been very good to Marathon Oil (NYSE:MRO). The company exited 2012 with average production of 65,000 boe/d, and recently raised its 2013 target to a range of 70,000-85,000 boe/d. For perspective, Marathon's overall Eagle Ford production was just 14,400 boe/d at the beginning of last year. Rapid production growth like that is a big reason why OPEC is concerned. That's especially true when considering, in Marathon's case, that the Eagle Ford is just one of the three game-changing plays the company is drilling as it grows its oil production in the Bakken and Oklahoma.

Final Foolish thoughts
No one predicted the current oil boom. The great fear was that global oil production had peaked, and that prices were only going to rise. Today, we find ourselves in an environment where OPEC is forced to cut its production in an effort to ensure that oil prices remain over $100 per barrel. That means that oil prices aren't likely to head much lower, but it also means that U.S. oil producers can earn plenty of profits by taking them away from OPEC.