The recent derailment of the Montreal, Maine, and Atlantic Railway train in Lac Megantic, Quebec, caused irrevocable damage on a small town just 10 miles from the U.S.-Canada border. The primary cargo of that train, crude from the Bakken region, has led to many questions regarding the practice of moving oil by rail. A recent report from Moody's says this accident could lead to several new restrictions that could drastically hurt rail shipments. This probably isn't a revelation, but let'slook at where the oil-by-rail story started and who will see the worst effects of a slowdown.

For lack of a better form of transportation
The recent surge in rail shipments of oil got its start back in 2009, when EOG Resources (NYSE:EOG) announced a deal with Burlington Northern Santa Fe to move crude away from the Bakken region to markets such as Cushing, Okla. At that time, only 110,000 barrels of oil per day could be moved away from the region through pipeline, and the expansion of production there meant that other methods would need to happen. While trucking to other markets was deemed uneconomical, the differences in spot prices between Bakken crude and West Texas intermediate made it worth the extra costs to ship by rail.

What several oil companies realized, though, is that moving oil by rail did one thing that pipelines could not: reach the East Coast and West Coast markets. Less than six months ago, the price spread between Bakken crude and imported Brent crude -- the primary source for East Coast refiners -- was over $20. So despite the premium to move by rail versus by pipeline, it was still well worth it for the refineries. Refiners and producers from the Bakken region have thus begun to move massive amounts of oil by rail. Continental Resources (NYSE:CLR), the largest producer of crude from the Bakken, now transports about 80% of all its crude by rail, and Phillips 66 (NYSE:PSX) signed on to a five-year contract to receive 50,000 barrels per day of Bakken crude that will get there mostly by rail.

Shipments of oil by rail have more than doubled in the past three years, and the inability of pipelines to keep up with production for regions like the Bakken have translated into a bright future for rail shipments. Then this happened:

Where do we go from here?
The recent tragedy in Lac Megantic has exposed some of the rails' most glaring problems as a mode of transportation for oil. Not only does rail move through population centers, but it also has a higher frequency of spills in comparison with pipelines. According to the International Energy Agency, the occurrence of oil spills from rail shipments between 2004 and 2012 was six times greater than from pipelines.

To be fair, the volume of a rail spill is generally much smaller than a pipeline spill. But it's very likely that the Quebec incident will lead to investigations into how to make rail transportation safer, and increased regulations will also more than likely play a part in the rail business as well. For companies that have a stake in oil-by-rail, the viability of rail transportation will depend greatly on any new regulations. For example, to retrofit the existing U.S. tanker car fleet with additional safety measures would cost more than $1 billion, according to the Association of American Railroads. These kinds of expenses will lead to higher costs to move oil by rail, and regions that have relied on rail could lose their competitive advantage.

What's most surprising is that if rail was to lose its competitive advantage to more expensive sources such as Brent, the rail companies would not be the most affected industry out there. Despite the large surge in oil carloads in the past couple of years, it still represents only 5% of total rail traffic in the U.S. year to date. Compare that with producers of Bakken oil, which depend on rail to move 75% of oil away from the region. EOG and Continental are heavily invested in moving their oil by rail, and they aren't the only ones. Both Hess (NYSE:HES) and Oasis Petroleum (NYSE:OAS) move about 50% and 80% of their oil from the Bakken region by rail, respectively. Without rail, there would be several thousand barrels of oil stranded in the region, and the prices for that oil would be likely to fall. Even with proposed expansions, pipeline capacity simply wouldn't be enough to move oil. 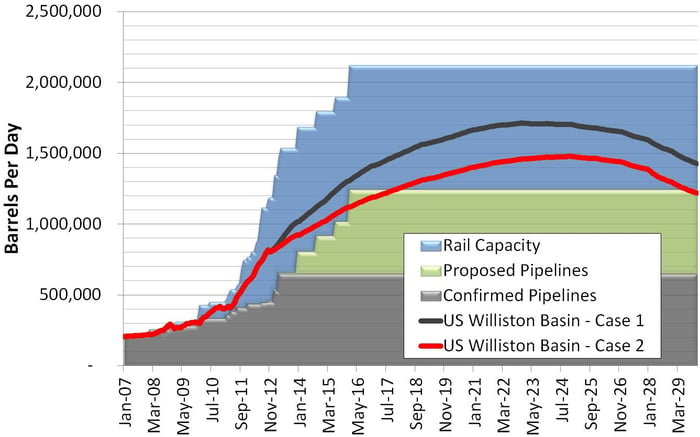 Another major region that could be hurt severely by a drastic cut in rail transport is Canadian oil sands. Both the Bakken and oil sands share the burden of inadequate pipeline capacity, but the political pressure against pipelines for this oil has been much stronger than anywhere else. Potentially, tighter regulations on rail transport could also mean a relaxation on the opposition to proposed pipelines such as TransCanada's Keystone XL or Kinder Morgan Energy Partners' Trans Mountain pipeline.

What a Fool believes
No explanation or investigation into this recent accident will do justice to the tragedy that struck this small town, but this could be a monumental moment for the entire North American oil industry. If we were to see any regulations that alter the viability of oil by rail, it could fundamentally alter the prospects of North American energy production and the profitability of many companies. As investors, we need to be aware of how these events will affect the broader market and the companies we hold in our portfolios, and this event is certainly one we will have on our minds for quite some time.