This supermajor oil company is undergoing a slow transition, but it remains to be seen whether this might benefit in the long run.

Lately, the market hasn't been treating ExxonMobil (XOM -0.85%) with a lot of respect. The oil and gas supermajor has noticeably underperformed the broader equity markets in the last 24 months. To give investors a perspective, this is how Exxon's stock performed since July 2011: 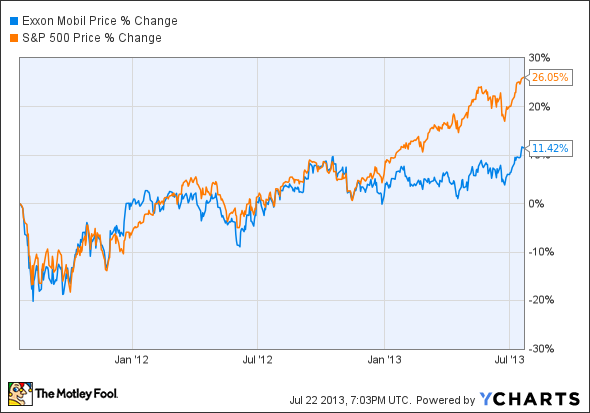 Compare this with the stock's performance for the previous eight years -- from July 2003 till July 2011 -- and it looks like this: 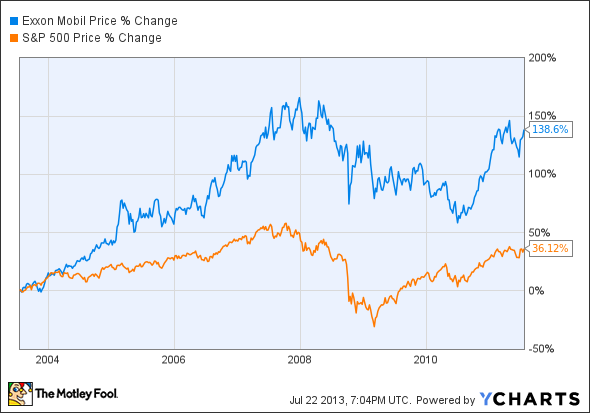 To summarize, Exxon underperformed the broader markets dramatically in the last two years.

What's the big reason behind these diminished returns? And more importantly, will this stock continue to underperform in the foreseeable future? With fewer than 10 days before Exxon reports its second-quarter results, Foolish investors should be concerned whether this stock is worth a place in their portfolios.

The crux of the problem
For a company whose market capitalization is north of $400 billion, the answer isn't so straightforward. However, the unmistakable signs of declining profitability are hard to ignore. A cursory look at the company's profit margins for the last five years does not reveal much. However, upon delving deeper, the cash flow statements reveal a trend that long-term investors need to be wary of: Over the last five years, net cash used for investing activities has doubled from about $15 billion a year to more than $30 billion a year.

Many might argue, especially those in management, that this isn't necessarily a bad thing. Larger investments should translate into higher production volumes in an era of increasing global demand as well as competition. Additionally, investment horizons in the oil and gas industry are pretty long -- in fact, a matter of decades.

While these arguments are fair, profitability ultimately boils down to margins per barrel of oil extracted and sold. And that's where it seems like a problem. The following chart depicts Exxon's 10-year growth in revenue and capital expenditure over the last 10 years. 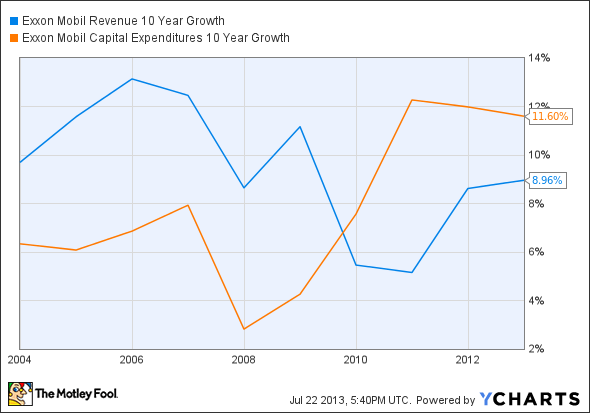 The era of cheap oil is over
While ExxonMobil operates as an integrated oil and gas company, the upstream segment accounts for about 74% of earnings after tax. The company's profitability is, therefore, largely tied up with its exploration and production activities.

While major investments are under way, margins should likely remain suppressed unless crude oil prices shoots through the ceiling. The latter isn't an impossibility with crude prices currently nearing $110 per barrel.

Also, a company like ExxonMobil cannot be written off in a hurry. Exxon's strength lies in its efficiency, deep cash reserves, and shrewd management. Many of its current projects are ambitious. The company is also betting big on natural gas. Exporting LNG to Asia could be a profitable move, at least for the next five years.

Of course, rising crude oil prices continue to be Exxon's biggest driver to improve margins. But whether this stock is capable of outperforming the broader markets still remains a $400 billion question. Long-term investors should carefully watch this stock.

Fool contributor Isac Simon has no position in any stocks mentioned, and neither does The Motley Fool. We Fools may not all hold the same opinions, but we all believe that considering a diverse range of insights makes us better investors. The Motley Fool has a disclosure policy.