"Buy low, sell high". So goes the old adage for how to make money in the stock market. But what if there were another way? What if we could "buy high, and buy higher"?

I know that sounds ridiculous, but this past week, Fool user aryan89 posted a brilliant message on the Fool's premium boards. In it, he said:

History tells us that rather than trying to time the market and buy low, sell high, it is better to stick to your investing philosophies. If the reasons you invested into a company are still intact, rather than asking "Should I sell and take profits?", the correct question would be to ask, "Should I buy more?"

With this in mind, as I look for five potential stocks to invest my real money in during the month of August, I'm looking for companies and stocks that are firing on all cylinders, and unabashedly buying in even though a stock has had strong price appreciation.

Today, I'm investigating Johnson & Johnson (NYSE:JNJ), a stalwart that is spanking the S&P 500 by 14 percentage points in 2013 and offering a nice 2.9% dividend to boot. 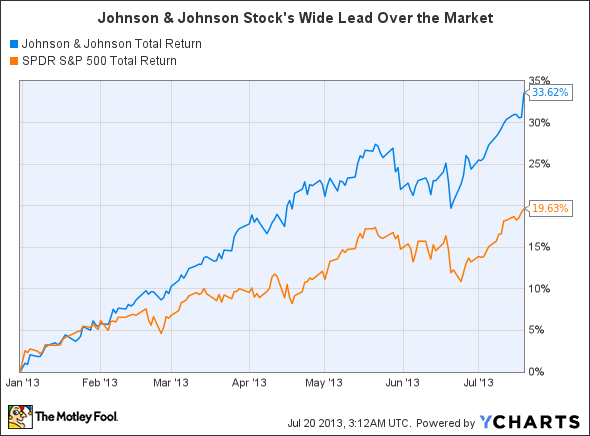 What's behind the recent success?

The company kicked things off with a bang in late January when it reported fourth-quarter earnings. Not only did Johnson & Johnson beat earnings estimates, but it also created a stir when it hinted that it might consider selling off its clinical diagnostic business.

That positive momentum carried over when Johnson & Johnson announced first-quarter earnings in mid-April. The company's consumer division -- which sells over-the-counter products -- stabilized after several quarters of turbulence because of product recalls.

The pharmaceutical division -- with a strong lineup of FDA-approved drugs on the market -- saw revenue jump 10.4%. And the medical devices unit also showed strong growth, clocking in with 10.2% revenue growth, though much of that was due to the acquisition of Synthes.

What've you done for me lately?
That brings us to this past week's earnings. As you can see, both revenue and earnings beat estimates and showed healthy growth for such a large conglomerate.

While the consumer segment was somewhat stagnant, growing at just 1.1%, the other two divisions -- pharmaceuticals and medical devices -- once again picked up the slack.

Strong sales of Remicade (for Crohn's disease) -- which accounted for roughly a quarter of prescription sales -- helped the pharmaceutical business post an 11.7% boost to revenue.

Regarding medical devices, which posted a healthy 9.6% jump in revenue, investors need to dig into the details. Had the company not acquired Synthes or divested its DePuy trauma business, the division would have only posted a 0.5% jump in sales growth.

Why am I considering the stock?
As I learn more and more about Johnson & Johnson with each passing quarter, a few things become clear. The first is that the consumer business will probably never be a huge growth engine, but it provides stability.

The medical device division is somewhat hit-or-miss. It will be interesting to see how the Synthes acquisition plays out, as well as to see if Obamacare has the same consequences on device sales as some see it having on other medical device companies like Intuitive Surgical(NASDAQ:ISRG).

That leaves the pharmaceutical business, which I think has some promising drugs in the pipeline (or newly released) and offers some real potential for growth. Johnson & Johnson has been zeroing in on cancer treatments, and bolstered that effort with the acquisition in June of Aragon Pharmaceuticals, which focuses on hormonally driven cancers.

Though shares are trading for a somewhat-pricey 17 times earnings, I think the combination of stability (consumer business), potential for growth (pharmaceutical business), and a healthy 2.9% dividend make Johnson & Johnson stock a buy worth making.