Over the past year, Netflix (NASDAQ:NFLX) and Apple (NASDAQ:AAPL) have traded places in the minds of many investors. A year ago, Apple was a Wall Street darling that was nearing its all-time high above $700, with many analysts predicting a run to $1,000 or higher. Meanwhile, Netflix stock was down in the dumps, trading for as little as $53 -- a far cry from its all-time high of more than $300 in 2011. 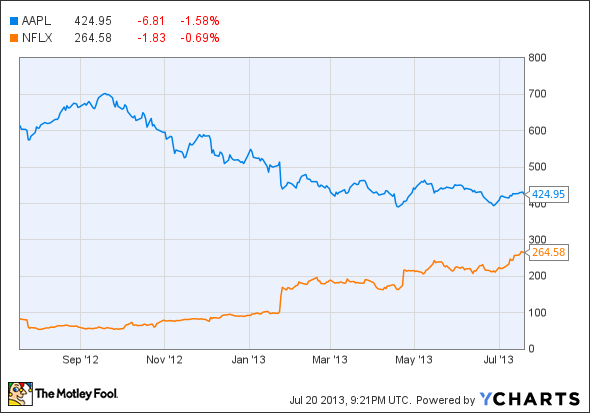 As the two companies prepare to report June-quarter earnings this week, Netflix has surged back toward its all-time high, while Apple has been languishing below $450 for most of the year. Yet the two companies face surprisingly similar strategic landscapes, with market saturation posing a potential threat to future growth.

A similar timeline
The recent histories of Netflix and Apple parallel each other in many ways. Today, Netflix and Apple each have one signature product that consumers identify with the brand more than anything else. For Netflix, it's the company's streaming-video service; for Apple, it's the iPhone.

Both of these products were introduced in 2007. However, neither product was fully formed at that time. The Netflix "Watch Instantly" service was just a free perk for subscribers to its DVD-by-mail service, and users were only allotted a certain number of hours of viewing per month. The iPhone was only available through AT&T in the U.S. initially, and the App Store did not even exist until 2008.

In the U.S., the iPhone did not become widely available until 2011, when it finally launched on the Verizon and Sprint networks. By then, the iPhone had received most of the upgrades that differentiate today's iPhone from the original 2007 version. Netflix developed its streaming service at a similar pace. The streaming-only plan launched in late 2010, and in 2011 it was separated from the DVD-by-mail service.

A different perception
Apple's iPhone and Netflix's streaming-video service have been in the market for a similar length of time. Investors have become increasingly worried over the past year that the iPhone has already saturated the market. These fears seem overblown, but given 55 million U.S. iPhone users as of May, it's true that Apple cannot sustain rapid user-base growth in the U.S. for much longer.

Yet comparatively few people seem to be concerned that Netflix may be approaching its own saturation point in the U.S. Indeed, the company is trading for more than 85 times forward earnings estimates, indicating that Wall Street expects the company to post rapid growth well beyond 2014.

Netflix ended Q1 with 29.2 million U.S. streaming subscribers and projected that this would grow to as many as 30 million subscribers by the end of Q2.

This may seem like a much lower market penetration than the iPhone. However, Netflix allows -- and even encourages -- family members to share an account, whereas smartphones obviously cannot be shared effectively. As a result, Netflix's addressable market in the U.S. is, at most, the 115 million households here, whereas there are already 141 million U.S. smartphone users.

So what?
All of these statistics may seem meaningless out of context. The key point for investors is that Netflix's domestic streaming business is just a year or so behind the iPhone in terms of market saturation. Both products entered the U.S. market around the same time, and the iPhone's growth trajectory has been just slightly ahead of Netflix's.