I nodded my head in agreement at these comments on buy-and-hold investing from John Hussman (tracked down by Cullen Roche):

Just as day follows night, buy-and-hold strategies reach the peak of their popularity at market tops, because those are the points where every effort in recent memory to sell or reduce risk has apparently failed. Conversely, buy-and-hold strategies are most reviled at bear market troughs, when the full weight of losses is felt. I have no argument at all with investors whose strategy adheres to a disciplined buy-and-hold, diversified across asset classes, over the full market cycle. In contrast, I have great concern about investors who discover buy-and-hold at the top, and adhere to it only long enough to abandon it at the bottom. The most important part of a buy-and-hold discipline is the commitment to remain passive even as it experiences massive interim losses. Look, kid, I never said this was easy. The road to easy street runs through the sewer.

This is exactly right, in my view. The reason so many investors think buy-and-hold investing doesn't work is because they don't have the patience to let it work.

It's also important to point out that buy-and-hold doesn't mean you can buy with abandon at any price. Here's what I wrote a year ago:

The majority of today's investors, who likely began investing during the insane late '90s, have fared [poorly].

But that doesn't prove buy and hold is dead. It just proves that the deluded interpretation of it -- that you can buy stocks any time at any price and still do well -- is wrong. But it was always wrong. It just became easy to forget during the '90s bubble. For as long as people have been investing it's been true that if you pay too much for an asset, you won't do well in the long run. If you buy the S&P 500 at 30 or 40 times earnings, as people did in the late '90s, you're going to fail. If you do like Bill and wait until it's closer to its historic average of 15-20 times earnings (or even better, lower), you'll do all right. Nothing about the last decade has changed that. The '90s, not the 2000s, were the fluke.

A few charts show what I mean.

These three, which I copied last year from statistics blogger Nate Silver, show the correlation between S&P 500 returns and P/E ratios between 1871 and 2011 if held for one year:

It's pretty scattered. There's a lot of randomness. That frustrates investors.

But hold stocks for five years, and the plot gets more organized: 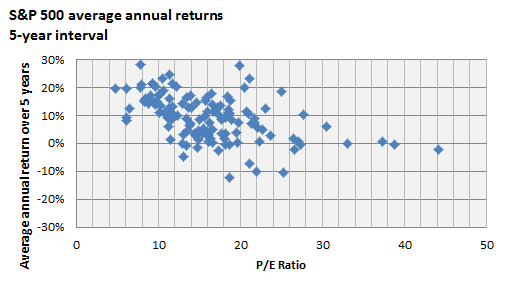 Holding for five year periods, you can have reasonable confidence that buying stocks at good prices will lead to good returns. Randomness doesn't go away, but it diminishes. 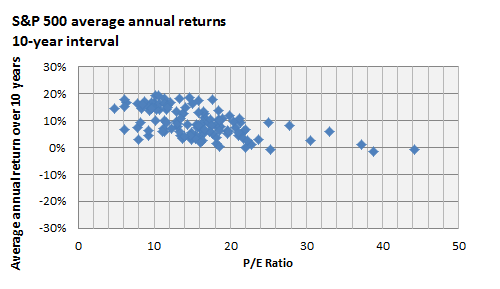 Much less randomness. Buy stocks at good prices, and you should be able to sleep well at night knowing that you'll do well over the subsequent 10 years. There will still be pullbacks and crashes and bear markets. But over time, you'll likely do just fine.

Most investors won't wait 10 years. They get anxious and impatient. That's where Hussman's quote comes in: "Look, kid, I never said this was easy. The road to easy street runs through the sewer."

Remember that the next time the market goes through a slump.