Investors face quite the dilemma when choosing which way to play the explosive growth of oil and gas production. Some choose to invest in the upside of the commodities by investing directly in an oil and gas producer. Others want the security of midstream cash flows and instead choose to invest in the MLP sector. That means that investors seeking a little bit of exposure to both plays need to invest in two separate companies. Unless, of course, they've invested in Eagle Rock Energy Partners (NASDAQ: EROC).

Overview
Eagle Rock's business is fairly evenly split between upstream and midstream, which are 54% and 46% of its business mix, respectively. The $2.3 billion company produces about 75 million cubic feet equivalent per day, while gathering about 565 million cubic feet equivalent per day. Combined, the business produces about $239.6 million in adjusted EBITDA, most of which is paid out to investors. At recent prices, this has equated to a distribution yield of about 12%.

Those returns are produced from Eagle Rock's solid asset base, which is fairly concentrated in the Gulf Coast and midcontinent regions of the U.S. as seen on the following map: 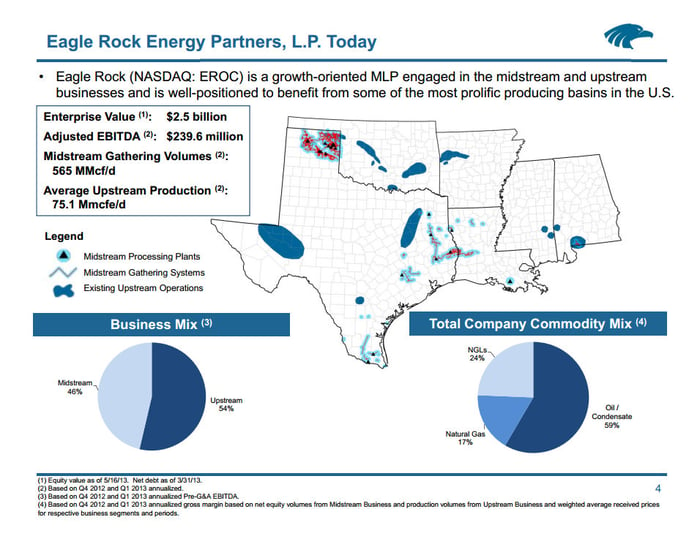 Rock-solid earnings
Its midstream business is focused on two areas: the Panhandle and East Texas. Overall, the company owns over 8,000 miles of pipelines and 20 processing plants, including the recently started Wheeler plant. Eagle Rock has been very active in building out its midstream business, which has included organic growth projects like Wheeler, as well as acquisitions such as last year's deal with BP (NYSE:BP).

The $227.5 million BP deal included two processing plants and a 2,500-mile gathering system in the Panhandle. In addition to the acquired assets, Eagle Rock secured a 20-year, fixed-fee gathering and processing agreement with BP, which is very important as it secures the cash flows of those assets. If there is a knock against Eagle Rock's midstream business its that not enough of its cash flows are fee-based; however, the company is rapidly moving in that direction. That's what really makes this a win-win deal for both companies -- BP was able to cash out of these non-core assets while Eagle Rock added secured cash flows from a strategic, long-term partner.

Further, Eagle Rock was then able to leverage its extended footprint in the Panhandle to add new fee-based gas gathering and processing agreements with other major producers, such as Apache (NASDAQ:APA). That deal, which was signed this past March, added 106,000 gross acres as it supersedes and expands the previous agreements, making it a win for both sides. It's this combination of organic and acquired growth that should keep Eagle Rock's income growing for a long, long time.

Soaring growth potential
What makes Eagle Rock unique is that in addition to owning a traditional midstream business, the company balances it with upstream oil and gas assets. Overall, the company has 350 billion cubic feet equivalent of oil and gas reserves across five operating areas. These are long-lived, low-decline assets, which are great for an MLP like Eagle Rock.

The big issue recently is that top upstream MLP, LINN Energy (OTC:LINEQ), has come under attack this year as some investors have questioned its business model. Eagle Rock has been caught in the downdraft in the sector, and its units have dropped more than 25% in the past quarter. But Eagle Rock is a much different company than LINN -- nearly half of Eagle Rock's assets are midstream assets while LINN has relatively few midstream assets. The other major difference between the two is that LINN hedges 100% of its production several years out, and had been purchasing puts as a means to hedge. Eagle Rock, on the other hand, hedges around 80% of its production out for two years, and dramatically reduces the volumes hedged after that. Further, its hedges are in swaps and collars so most of the issues that shorts have with LINN aren't to be found at Eagle Rock. However, it does highlight an area investors need to watch.

The bottom line for Eagle Rock though is that the upstream assets add upside to it's business as the company will benefit to some degree from rising oil and gas prices as well a from its ability to grow production either organically or by acquisitions. Most of the organic upside will come from its "SCOOP" acreage, which is the South Central Oklahoma Oil Province. The company owns about 16,000 net acres and has one rig currently running, while also participating in 10 non-operated wells this year. Production from this growth asset will help offset declines elsewhere in its portfolio as well as enable the company to grow its production overall.

Final Foolish thoughts
There's a lot more to the Eagle Rock story, which is why I'll be drilling down deeper into the company in future articles. It's a very intriguing two-for-one play, as it offers both growth and income from its combination of upstream and midstream assets. That's not to say that the company is without risk, but that's a story for another day.