Initial jobless claims bumped up nearly 2.1% to 343,000 for the week ending July 20, according to a Labor Department report released today.

After falling a revised 6.1% the previous week, this newest report clocked in 2,000 claims higher than analysts' expectations. 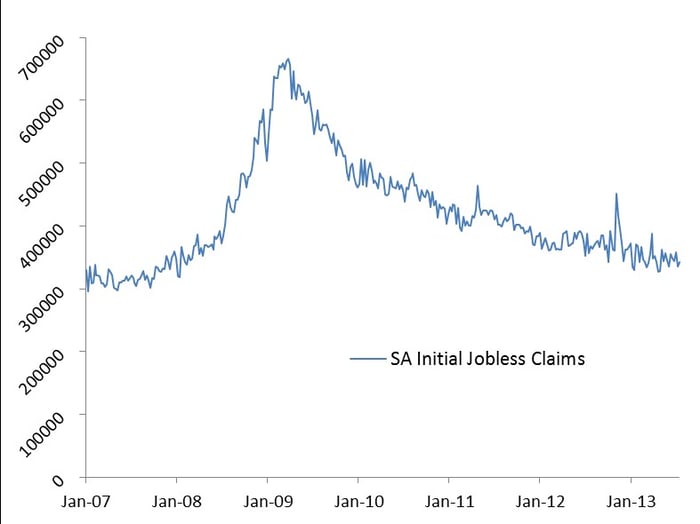 From a more long-term perspective, a 0.4% drop in the four-week moving average to 345,250 initial claims marks a second week's trending decrease. Both the latest week's claims and the four-week average fall significantly below 400,000, a cutoff point that economists consider a sign of an improving labor market.

On a state-by-state basis, six states recorded a decrease of more than 1,000 initial claims for the week ending July 13 (most recent available data). Michigan's number fell a dramatic 11,970 due primarily to fewer manufacturing layoffs, while New York and New Jersey both listed fewer education layoffs as a main reason for their respective 4,740- and 4,480-initial-claim drops.

For the same period, 14 states registered increases of more than 1,000 initial claims. Georgia led the push, with 7,030 more claims due primarily to manufacturing layoffs. Retail trade layoffs helped California add on 6,800, while Texas offered no comment for its 6,000-initial-claim increase.

Weekly applications data can be volatile in July. Automakers typically shut their factories the first two weeks of the month to prepare for new models, leading to temporary layoffs. But this year much of the industry has skipped or shortened the shutdowns to meet stronger demand.

More than 4.8 million Americans were receiving unemployment benefits the week that ended July 6, the latest data available. That is down nearly 20% from 6 million a year earlier.