Consumers are more confident than they've been in six years despite an unemployment rate of 7.6%, and an economy that's growing at a snail's pace. Given the economic backdrop, it seems strange, but I think there are three reasons most consumers are feeling good about their personal situations -- and it may help fuel the recovery.

The fear of getting fired
In 2008 and 2009, layoffs were rampant, and anyone who had a job was just hoping to keep it. I was one of those who were laid off as the economic fallout spread, and I could see those around me becoming less and less secure in their own jobs. It's impossible to feel confident about the economy or your personal spending when there's a constant fear of losing your job, and that's a big reason why confidence fell.

What's changed since early 2009 is a steady improvement in initial unemployment claims, aka layoffs. In fact, we're now at a level of initial claims for unemployment that matches the low during the 2000s. 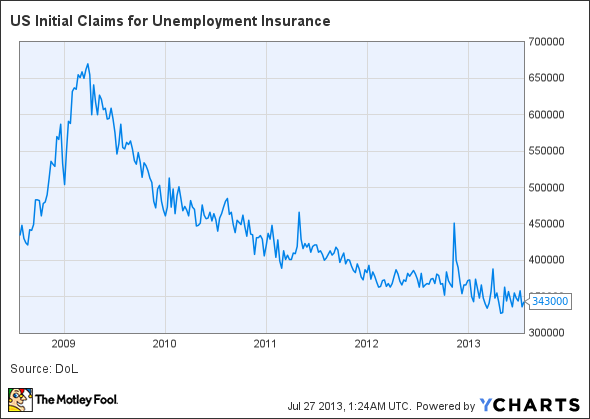 Today, people are less fearful they'll lose their jobs, and that may do more to help confidence than anything else.

Stock markets are up
There's some sort of psychological affect the stock market has on people, whether they're active investors or not. When the Dow Jones Industrial Average (DJINDICES:^DJI) and S&P 500 (SNPINDEX:^GSPC) are reaching new highs, people have a positive view of the economy and the companies they work for, whether it's justified or not.

The financial impact can be important for some, as well. When stocks go up, 401ks go up in value, personal portfolios go up, and even pensions look safer than they do in bad times (except for Detroit).

The bottom line is that a good stock market makes people feel better, and with the Dow and S&P 500 hitting new highs almost every week, it's a confidence boost.

Right side up home values
For homeowners, there may not be anything worse than being upside down on your mortgage. Foreclosure can be devastating, and even a short sale will ding your credit for a number of years, even when it's the right financial move. That's why rising home prices around the country give millions of people a boost of confidence, even when the economy isn't growing.

In June, the median sales price for existing homes was up 13.5% from a year ago, to $214,200, the 16th consecutive month prices have risen. The National Association of Realtors also said that the annual rate of sales of homes rose 15.2% last month to 5.08 million, so it's easier to sell your home.

An economy to be confident in... for most
These three factors should have most Americans feeling confident about their futures, but there's still a long way to go before we can all feel confident. An unemployment rate of 7.6% leaves a lot of people behind, and until that improves, there will be a cap on growth in the U.S. The good news is that consumers are 70% of the economy, and happy consumers means more economic activity and, hopefully, more jobs to fill.

Why Are Consumers so Confident? @themotleyfool #stocks $^DJI $^GSPC Next Article
Current