The Pending Home Sales Index fell 0.4% to 110.9 for June, according to a National Association of Realtors report released today.

After jumping up a revised 5.8% in May to reach its highest level in more than six years, analysts had expected an even larger 1.4% dip in the Index's reading. 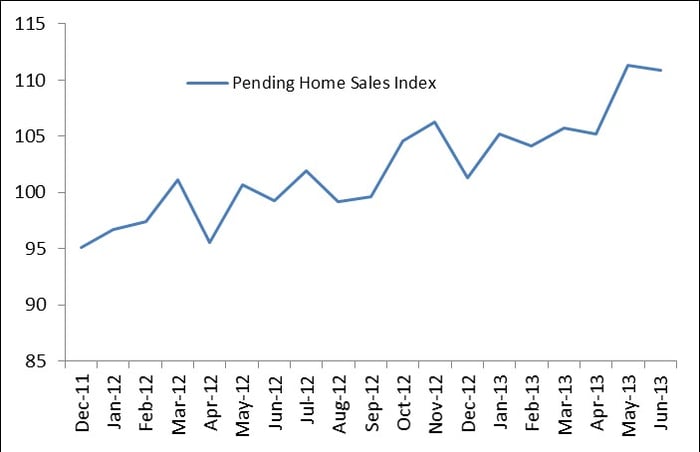 The index is based on contract signings (with sales usually finalized one or two months later) and is benchmarked to 2001 contract activity. (An index of 100 is equal to the average level of contract activity during 2001, which was the first year the association examined data).

Mortgage interest rates began to rise in May, taking some of the momentum out of contract activity in June. The persistent lack of inventory also is contributing to lower contract signings. There are some homebuyers who sign contracts with strong lender commitment letters, but have floating mortgage interest rates. Those rates can be locked as late as 10 to 14 days before closing, so some homebuyers may change their minds if the rate rises too much, which apparently happened with some sales scheduled to close in June. Closed sales may edge down a bit in the months ahead, but they'll stay above year-ago levels.

The average rate on a 30-year fixed mortgage has jumped a full percentage point since early May and reached a two-year high of 4.51% in late June.

June marks the 26th straight month that pending sales have clocked in above year-ago levels. The June index is 10.9% above the year-ago reading.

Looking ahead, the NAR expects 2013 existig-home sales to grow more than 8%, while a continued supply squeeze will push median prices up almost 11%.