U.S. stocks were flat today, perhaps reflecting investors' trepidation as they wait for the Federal Reserve's policy statement at the conclusion of the July FOMC meeting tomorrow. The S&P 500 (SNPINDEX:^GSPC) could only muster an 0.04% gain, while the narrower, price-weighted Dow Jones Industrial Average (DJINDICES:^DJI) fell 0.01%.

Markets have moved up strongly in the last year, and a lot of that is on expectations of a recovery. We expect that recovery to come through. We think the next phase of the rise in equity prices is not going to be about [price-to-earnings] multiple expansion but about earnings recovering as the global economy picks up and gradually gets back to a normalized trend. I think, certainly, profits growth in general over the next year or two is going to be to be the main driver for the markets.

What a load of nonsense.

This graph shows year-on-year growth for trailing-12-month earnings per share for companies in the S&P 500, beginning with the full year 2010 through the first quarter of this year (i.e., the last period that contains only realized earnings, rather than estimates): 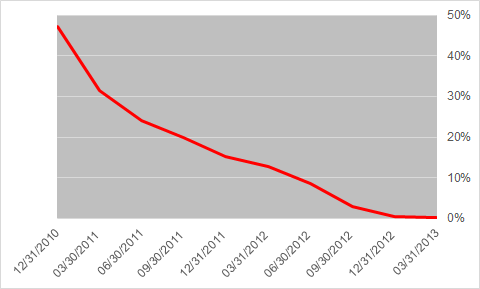 Now, look at the same graph beginning with the 12-month period ending at Q2 2013: 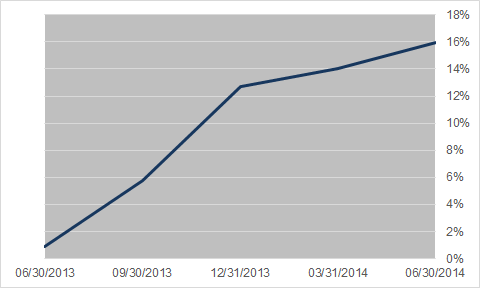 What a recovery! Earnings growth has been falling steadily, but as soon as analysts begin peering into a crystal ball and start freeing themselves from observed data, it stages a miraculous pick-up. In other words, analysts would have us believe that growth bottomed out just as we need to start relying on estimates rather than hard data. Forget the past; all will be well in the future!

However, analysts offer no explanation for this miraculous growth spurt. Nobody demands one, since those S&P 500 earnings estimates are derived from individual company estimates. Analysts just need to have a story to explain why the companies they're following will put up the numbers they're publishing. After that, the Lake Wobegon effect takes over.

No mention is made of the fact that the S&P 500's profit margin in 2011 and 2012 was already higher than at any time since the trailing 12 months ended in the third quarter of 2007 -- the last gasp of the credit bubble, when inflated financial company profits were goosing S&P 500 earnings.

If margins don't expand, it's always possible that significant revenue growth could pick up the slack and provide the earnings growth analysts expect -- possible, but unlikely. A more likely scenario is that earnings estimates for the rest of 2013 and for 2014 will need to be revised lower. Those revisions could end up being "the main driver for the markets," to use Mr. Oppenheimer's words, but not in the direction he's hoping for.