As far as the market is concerned, Amazon.com (NASDAQ:AMZN) can do no wrong. Miss earnings? No problem. Lose money? No big deal. Have no plan to make a profit? Who cares?

CEO Jeff Bezos has a strategy for world domination that doesn't involve making money and instead focuses on growing his business into every nook and cranny he can find. But is that a great long-term strategy? It hasn't worked for anyone on such a grand scale before, and so far it hasn't been great for Amazon financially.

Focused on everything
As an investor, it's hard to define what Amazon is. It's an online retailer, a cloud service company, a streaming media provider, a tablet company, a grocer, and much more. But can you do all of these diverse things and stay a cohesive and profitable company?

Amazon is showing that it's a struggle, at least financially. Last quarter, Amazon lost $62 million despite growing revenue 22% to $12.8 billion. In the past six months, the company has lost $162 million and yet investors continue to bid the stock up.

The big concern that gets little attention is Amazon's margins. The advertised gross margin continues to improve but the real gross margin, including free goodies like fulfillment and technology and content, has fallen from 11.3% a year ago to 6.8% in the second quarter. 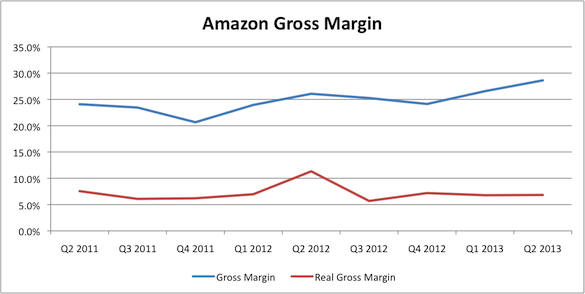 What other stock would continue rising despite losing money and no improvement in margins in sight? Eventually the market has to demand a profit... right?

But what about the cash flow?
Amazon has pulled another fast one on investors by getting them to focus on cash flow. Bezos will argue that he's all about creating cash and that's now investors should judge the company. So how does Amazon stack up?

Over the past year, Amazon has generated $4.53 billion in operating cash flow but $1.96 billion is from increasing accounts payable (net $1.04 billion when you subtract the increase in accounts receivable) and $2.22 billion is from additions to unearned revenue. The latter is revenue that's been paid for but Amazon has not yet provided a good or service, not exactly a quality long-term cash generator. The accounts payable figure is equally unsustainable unless you think Amazon can grow 20% every year, forever. Let me explain.

When Amazon takes an item into inventory, it agrees to pay for that item in 30, 60, or maybe even 90 days. When a customer buys a product from Amazon, it pays for that product immediately. If Amazon can turn over inventory quickly, it can generate cash flow even if it doesn't generate a profit. But it can't do so forever.

If Amazon stops growing, the cash flow generation from accounts payable stops, and if Amazon has negative growth, it would actually have negative cash flow from operations. So, how is growth going? 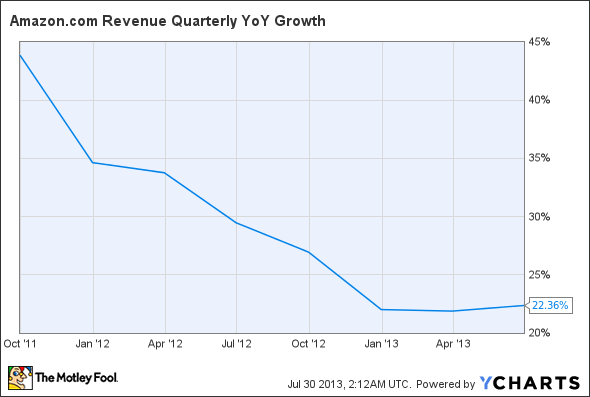 Growth is clearly slowing at Amazon, and eventually it will just hit the law of large numbers. You can't grow faster than the economy forever, much less in excess of 30%. So eventually, this cash flow generator will turn off.

Bezos says Amazon is investing in growth and that long-term this will pay off for investors. My question is: When? Amazon generated $61.1 billion in revenue and can't make a profit at that size, so how big does Amazon have to be before investors can expect bottom-line results?

I'm short Amazon, and clearly that's been the wrong play for the past year, but as financials get worse, I get more engrained in my position. Amazon simply doesn't look interested in making a profit, and eventually that will come back to bite it.

Why Does Amazon Get a Pass From Mr. Market? @themotleyfool #stocks $AMZN Next Article
Current