What a frustrating life Riverbed Technology (NASDAQ:RVBD.DL) investors lead. How do I know? I'm one them, and tonight I'm feeling the sting of yet another lousy Riverbed earnings report.

"Revenue from the acquired OPNET products was $40 million, $2 million below the low end of our indicated range, as we continue to work through combining the 2 companies," CEO and co-founder Jerry Kennelly said in a conference call with analysts.

Profits took a toll as a result. Riverbed earnings came in at $0.22 a share, a penny lower than last year's $0.23-per-share performance despite a 26% jump in revenue. Why? Growth cost too much. Operating expenses soared 60% while cost of revenue ballooned 41%.

"Q2 was our second full quarter owning OPNET, and it was an important one relative to the integration," Kennelly said on the call. "But with the activities remaining, it is clear that this work will be in process for another quarter or so. Although not as fast as we had hoped, the total elapsed time will likely fall within established norms of 6 to 9 months for sales integrations of the scope and scale represented by this large transaction."

Translation: For all its promises, the OPNET deal is proving to be every bit as expensive as skeptics might have feared. Investors have paid a heavy price waiting for Riverbed to make good: 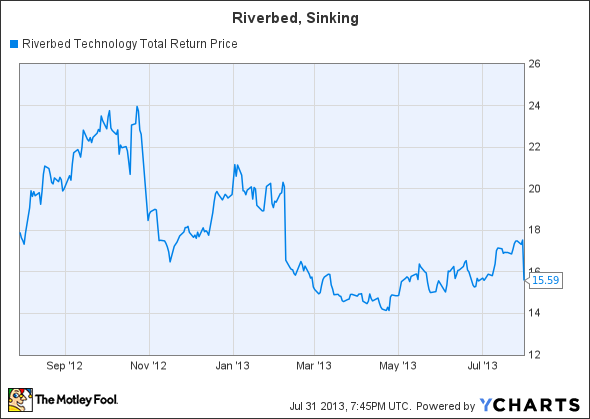 So is it time for me to sell? Or should I wait for the government to resolve its budget issues on the hopes that clarity will boost federal spending and with it Riverbed's fortunes? Federal accounts now represent 18% of Riverbed's revenue.

I've found patience to be a powerful tool in my decade of investing so you can expect me to take time deciding what to do with this stock. Though that could change if there's evidence of Riverbed losing an inordinate number of deals to Cisco Systems (NASDAQ:CSCO) or newer rival F5 Networks, which reported a nice beat in its fiscal third quarter.

For his part, Eric Wolford, Riverbed's products chief, said on the call that the company was still winning nine of 10 of its 200 or so "battles" with Cisco each quarter -- a good sign in that it speaks to Riverbed's technical advantages in accelerating the delivery of data over a geographically dispersed network.

Where do you stand? Did the Riverbed earnings report leave you discouraged, ambivalent, hopeful, or none of the above? Leave a comment to let us know what you think.

Is the Riverbed Earnings Report as Bad as It Looks? @themotleyfool #stocks $RVBD.DL $CSCO Next Article
Current