Cisco (NASDAQ:CSCO) is having a great year. Its stock is up 33%, trouncing the rest of the market.

But Cisco's success hasn't been much help to the Dow Jones Industrial Average, where it's one of 30 components. Because the Dow weights its 30 holdings by share price, and Cisco has a relatively low share price, it makes up just over 1% of the index's weight. Its blistering outperformance has added less than half a percentage point to the Dow's gain this year.

Chevron (NYSE:CVX) is having a mediocre year. Its shares are up about 13%, trailing the overall market. But because it has a high share price, it makes up more than 6% of the Dow. Its underperformance has added eight-tenths of a point to the Dow's returns, or more than double the share of Cisco for one-third the return.

Every index needs to weight its components. Some weight them all equally. Others, like the S&P 500, weight by market cap. The Dow does it the most curious way possible: by share price, which has no relation to a company's size, value, or relevance.

This causes big skews between how individual Dow components have performed and their contribution to the Dow's return: 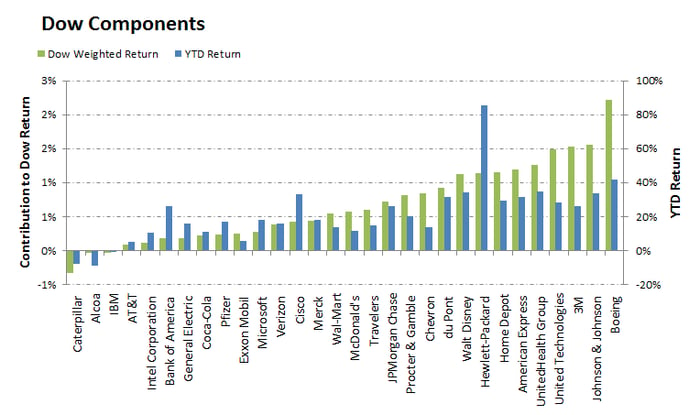 Last year I asked Rob Arnott, a pioneer of alternative forms of index investing, why the Dow uses such a funny weighting. He replied:

Weighing the Dow by share price goes back to quill pens in the 1890s. If prices were quoted and came across on a telegraph wire very slowly and you had to write down the numbers, what could be easier? It started out as I think 12 companies, 12 big blue chip companies. What could be easier than to add the 12 up; there weren't calculators. Let me rephrase that. There were calculators; they were human beings whose job was to calculate. Calculators would add up the 12, divide by 12. It's the simplest way to construct an index if you don't have a computer. It's kind of irrelevant today.

Few would argue that Travelers (NYSE:TRV) is more reflective of the American economy than, say, Apple (NASDAQ:AAPL). But Apple will never be allowed into the Dow without splitting its stock several times. Think about this, and the Dow's components aren't based on relevant companies that should be there, but on 19th-century mathematical constraints.