The American smartphone market used to be a fun place to play. A place where mobile pioneers could flex their muscles and make some money. Now it's a graveyard for a trio of dying elephants, who can only watch as Apple (NASDAQ:AAPL) and Google (NASDAQ:GOOGL) divide the new era between them.

That's the clearest takeaway from comScore's latest numbers on smartphone market shares. To wit: Google's Android platform and Apple's iPhones combine for 91.9% of the current market. The three next largest players add up for a 7.8% share, down from 8.7% just three months earlier.

The story gets even grimmer for the small guys when you consider the methodology involved in this study. comScore bases its research on surveys of American smartphone users, not on sales or shipments. So BlackBerry (NYSE:BB) and Microsoft (NASDAQ:MSFT) aren't just lagging behind the leaders in new sales. They're actively losing customers to the iPhone and Android crowd.

Let's zoom in on the little guys in order to get some more clarity out of the data: 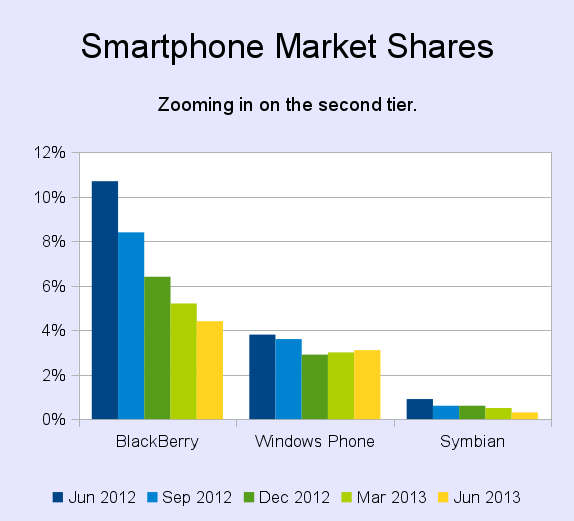 The story is particularly dark for BlackBerry. Its share of the American market has dwindled from 10.7% to just 4.4% in 12 months. That's despite launching the brand-new BB10 platform and a number of fresh handsets in 2013. Former CrackBerry addicts are still hanging up on the old favorite in huge numbers.

If BlackBerry has a future, it must be built somewhere else (and given today's announcement, I think management agrees with me). Fans of the company and stock like to point out that BlackBerry has a huge following in markets like Brazil and Indonesia. I guess we're about to see exactly how long BlackBerry can stay on the ropes with nothing but low-margin sales in developing markets.

For Microsoft, the story is less scary but still very frustrating. Redmond bet the mobile farm on its Windows Phone 8 platform, signing up former world leader Nokia (NYSE:NOK) to get some instant traction. Nokia basically abandoned its own Symbian software (included in the chart for completeness) and threw its entire weight behind Windows Phone. The result is not exactly overwhelming.

In summary, Apple seems to pick up whatever market share BlackBerry is losing. Everything else stays more or less flat. Windows Phone seems destined to become the third-largest smartphone platform in a couple of quarters, but only because BlackBerry can't stop its freefall.

It's true that the smartphone market is growing underneath these share shifts. comScore reported a 28.5% surge in American smartphone users over the last year. Sadly, that's not enough to make up for BlackBerry's plunging market share or Windows Phone's stalemate. The rich is still get richer, leaving the lower class far behind: 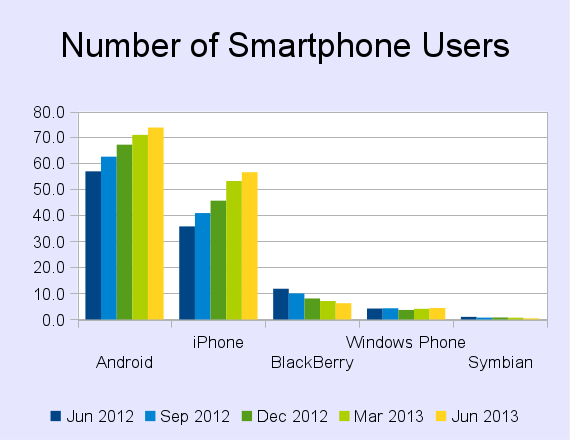 Given these solid trends, I'd think twice before investing in Nokia or BlackBerry. If you're buying Microsoft, you'd better make sure your thesis wasn't built on assumptions of mobile success.

It's no coincidence that I have bearish CAPScalls in place for all three of these underperformers. I recently took Apple's feet out of that fire, but my bullish CAPScall on Google is paired with a real-money stake in that stock.