Opinions rage about whether health insurance costs will rise or fall with implementation of the Affordable Care Act, commonly known as Obamacare. What gets relatively little attention, though, is that overall health-care cost growth has actually slowed down over the last few years. According to the Centers for Medicare and Medicaid Services, national health-care spending grew 3.9% annually from 2009 to 2011 -- the lowest rate since the government began tracking the statistics over 50 years ago.

Don't get used to slower health-care cost growth, though. There are several reasons why higher spending could soon rear its head again. Here are three that could drive health-care costs up in the near future.

1. Macroeconomic factors
The Kaiser Family Foundation, and the Altarum Institute's Center for Sustainable Health Spending, created a statistical model that helps identify how U.S. health spending varies with several macroeconomic indicators. Their research found that two macroeconomic variables account for a whopping 85% of variation in health-care spending growth between 1965 and 2011.

Inflation was the biggest factor influencing health spending. Real gross domestic product, or GDP, growth was next -- with particular focus on growth in the current year and the prior five years.

So far, the Federal Reserve has done a good job keeping inflation rates down. Actually, some are more concerned about deflation rather than higher inflation. GDP growth, though, should eventually increase. Take a look at the rolling six-year average real GDP growth rate since 1960. 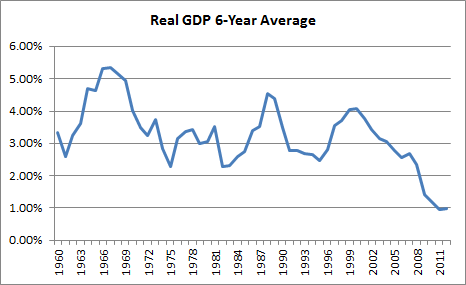 We're experiencing the lowest GDP growth rates in decades. Unless we assume that the economy never fully recovers from the Great Recession, GDP growth should pick up steam at some point. When it does, health-care costs will increase in tandem.

2. Obamacare
While we can't be sure how long it will take for GDP growth to get back to historical levels, there's one driver of higher health spending that you can probably mark on your calendar now: implementation of Obamacare in 2014. Actuaries and economists with the federal government expect health-care cost growth to jump to 7.4% next year as a result of health reform implementation.

The reason for this projected increase is simple: higher demand for health services. If more uninsured Americans obtain insurance, they're likely to use more health services. This increased demand will drive costs higher.

3. The patent cliff's cliff
Pharmacy benefits manager Express Scripts (NASDAQ:ESRX) says that spending on prescription drugs decreased in 2012 for the first time in two decades of monitoring. This slight drop stemmed from more low-cost generic drugs on the market. Several popular brand drugs lost patent protection in recent years in a wave often referred to as the "patent cliff".

However, Express Scripts' data points to what I have previously called the "patent cliff's cliff." A big drop-off is occurring this year for prescription drugs becoming available as generics. While there will be a rebound from 2014 to 2016, another big decline is projected beginning in 2017. As pharmaceutical companies come out with newer and more effective drugs, it seems likely that prescription drug spending -- the third-highest health-care cost in the U.S. -- will go up.

Who wins?
While no one wants to pay more for health care, smart investors will try to determine how to profit from the likelihood of rising costs. I see two potential ways to play this coming trend.

First, some companies will benefit from higher utilization associated with the implementation of Obamacare and possible higher GDP growth down the road. For example, Community Health Systems (NYSE:CYH), which operates 135 hospitals, could experience gains if health reform allows it to reduce the levels of bad debt written off from uninsured patients. However, note that a recent study from Deloitte casts doubt on whether hospitals will actually lower their bad debt levels with Obamacare.

Pfizer (NYSE:PFE) could be one stock that allows investors to profit from higher prescription drug spending. The big pharmaceutical firm has felt the pain of the patent cliff, but counts several new products in its lineup with strong potential and a pretty robust pipeline.

The second way to profit from higher health costs is to go with companies that help minimize those costs. Express Scripts is a good pick in that regard. As the nation's largest pharmacy benefits manager, or PBM, it has the scale and analytical capabilities to help other companies keep prescription drug spending under control.

MedAssets (NASDAQ: MDAS) is another potential winner. The company provides solutions for health-care supply chain management, and revenue cycle management to hospitals. Helping customers save money in an environment of rising costs makes for a pretty good business model, in my view.

Some people might think that the slowing health spending rates are here to stay -- with most Americans emerging as winners. I suspect that a rebound in GDP growth, Obamacare, and fewer new generic drugs will prove that view too optimistic. Then again, I might be too optimistic about the prospects for the economy, and for Obamacare's success in spurring demand for health-care services. We'll see which optimistic view wins.