Just about every day we hear a story of how China has passed the U.S. in some metric, or how China is slowly catching up to us. For the most part, these stories look to tap a xenophobic nerve as we slowly lose our position as the sole global superpower. Yet for all of those milestones that China passes or approaches, there are a few we will happily give to them. Soon, we will be able to relinquish the crown as top net oil importer. 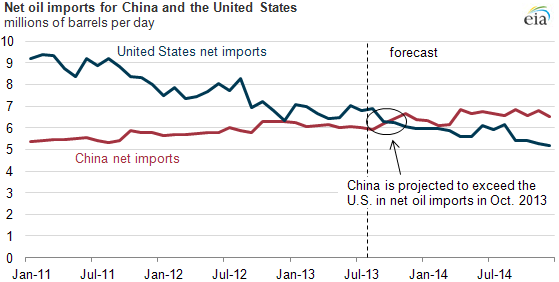 According to the projections at the US EIA, China is expected to pass the U.S. in net oil imports sometime this October. While there may not be any parades through Washington, D.C., to celebrate the moment, it is a pretty monumental event, considering it's a title we've held for more than 30 years. There are a lot of moving factors that have converged to make this happen, so let's look at the three key drivers behind this transition and what it means.

What got us here
Production from America's Oil Trinity has increased:
While several new oil and gas sources have emerged in the past couple of years, three distinct regions have been the workhorse of shale oil production: the Bakken, the Eagle Ford, and the Permian Basin. Combined, these regions have boosted American oil production by 1.5 million barrels per day between our peak imports in 2005 and today. What's even more remarkable about this movement is that the smaller, independent producers have been the drivers rather than the big integrated majors. One notable company that's been the poster child for this growth is Continental Resources (NYSE:CLR). In a mere three years, the company has tripled its oil production thanks to a strong drilling program in the Bakken.

America's going further on a gallon of gas: It's becoming more apparent that the new CAFE standards are decreasing fuel consumption. Between 2007 and 2012, total gasoline consumed per year dropped by 12%. While it's true that a slower economy does have something to do with it, we can't discount the efforts of the automakers. Ford (NYSE:F), for example, has increased its total fleet MPG by 14% over that time span, and its most recent offerings could reduce that amount even further.

China can't quench its own oil thirst: Although China still consumes a considerable amount less oil than the U.S., its oil reserves and production are even more paltry compared with its demand. Much of this new-found demand is being driven (no pun intended) by demand for vehicles. Ford just announced that its year-over-year sales for China were 71% higher than last year, and overall demand is still expected to soar. Estimates show that the Chinese automotive industry will grow another 50% by the end of the decade. Simply put, it would take a Hurculean effort for China's oil industry to keep pace with this sort of demand growth.

How America can benefit
Aside from the plethora of "We're No. 2!" billboards that will be plastered across the U.S. following this change, there are some very tangible ways the U.S. can take advantage of this situation. Not only will China struggle to keep pace with its oil production, but its refinery capacity will also fight to keep up with demand. Since the United States is now at a point where our refining capacity is greater than our petroleum product demand, we could be in a strong position to supply China with gasoline and diesel products. It may not all be domestic oil used in our refineries for quite some time -- or ever, for that matter. But the value added from refining the product here and shipping it there could be a boost to refiners' margins and could bring down our trade deficit with China.

Perhaps the largest obstacle in making this happen is logistics. Both Valero (NYSE:VLO) and Phillips 66 (NYSE:PSX), the two largest exporters of the independent refiners in the U.S., have nearly all of their excess refining capacity in the Gulf Coast region, which has the problem of being on the wrong side of the continent. So far, a majority of refined product exports have gone to European and South American markets, but the projected expansion of the Panama Canal in 2015 could change that dynamic very quickly.

What a Fool believes
Sometimes it's hard to grasp the fundamental changes that we've seen in the American energy industry. It's been less than a decade since we were in a position similar to China, where our depenence on oil imports was at alarming levels. Since then, we've stumbled upon a globally transformative amount of oil, and our efforts to curb overall demand are starting to bear fruit. It's hard to say whether China will be able to manage a similar type of turnaround with its own energy policies, but either way it will still take the nation years to reverse the trend.