The Great Recession began in December 2007. That's when the official scorekeepers at the National Bureau of Economic Research said it began, anyway.

It "officially" ended in June 2009, but everyone knew that was more technicality than substance. The economy stopped plunging around that time, but it wasn't within hailing distance of regaining the ground lost during the financial crisis.

But by one measure, it's really now over.

As of the second quarter, real GDP per capita -- how much the economy produces per person, adjusted for inflation -- is back at an all-time high: 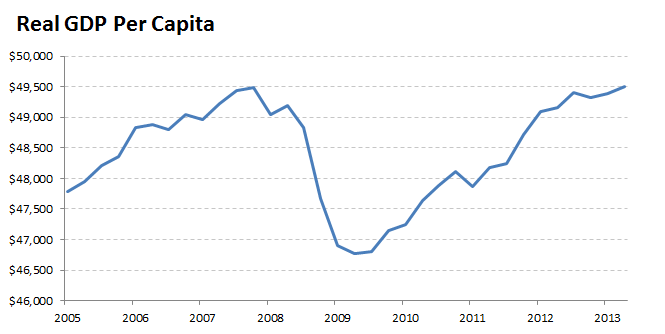 In simple terms, the country is now the richest it has ever been. Ever. In history.

The Great Recession is over.

On average, at least.

We've always had a split economy, but by some measures inequality increased during the Great Recession.

Take this table, showing changes in household net worths by income percentile over the past decade:

Adjusted for inflation, the median net worths of households in the 90-100 income percentiles increased from 2001 to 2010 -- not by a lot, but there was growth. But for the bottom 90%, real median net worths declined.

The spread between top and bottom income groups has probably grown wider since 2010, since the Dow Jones (DJINDICES:^DJI) has surged more than 50% and upper-earning households own a disproportionate share of stock assets: 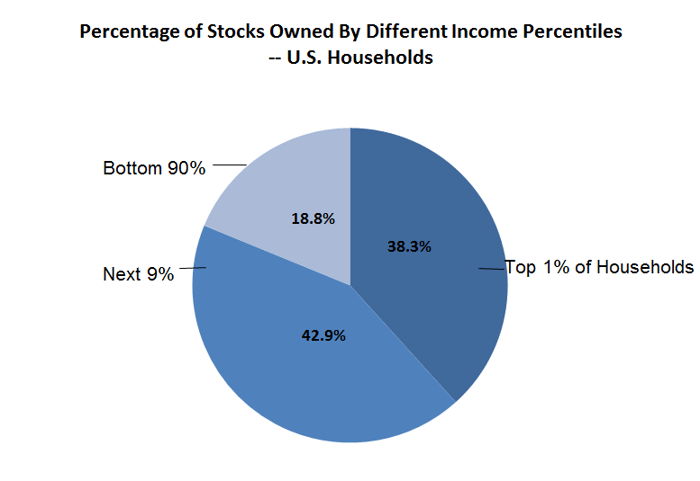 I've interviewed two dozen economists over the past two years, and I ask every one the same question: How long do you think it will be before the median American is doing better than ever? The most common response I've received is literally laughter. Maybe that's a contrarian indicator -- it always looks the worst when things are about to turn. And there are signs things could change. But the America-is-doing-great-while-most-Americans-aren't theme is powerful right now. It's bittersweet in every way.