Hewlett-Packard (NYSE:HPQ) has been the best-performing Dow stock over the past nine months, as it has recovered from overblown fears of its demise. In the second half of 2012, the company took two enormous writedowns totaling nearly $17 billion and provided disappointing 2013 guidance. However, since then, HP has delivered two consecutive earnings beats. The stock has rebounded accordingly. 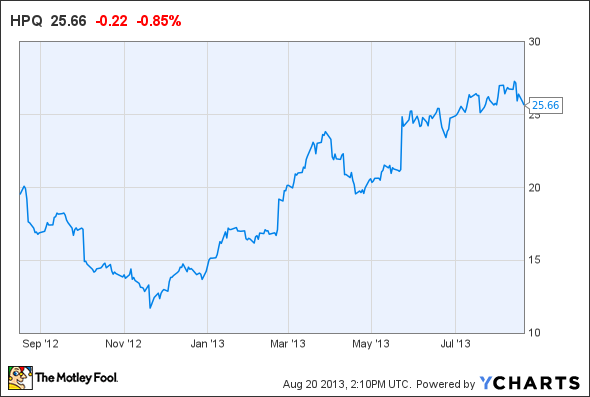 HP will report its fiscal Q3 results on Wednesday afternoon. While large tech firms have posted mixed performances recently, I expect HP to deliver another solid quarter, and the company even may be able to raise its full-year forecast. While the PC industry is still struggling, this should be offset by steady improvements in the rest of HP's business -- especially printing -- and deep cost cuts.

Rebound in printing
HP's healthiest business unit at this point is the printing business. While HP's printing revenue has been declining recently, the company has achieved significant margin improvement within the business. New initiatives -- such as marketing more profitable inkjet printers to small and medium businesses and lowering ink pricing in emerging markets -- have contributed to this improvement. The weak yen has also started to reduce the cost of laser components supplied by Canon, and this effect probably accelerated in Q3.

These improvements drove a big increase in HP's printing segment profit in the first half of FY13. Printing pre-tax income of $1.91 billion was up more than 20% year-over-year. This momentum bodes well for second-half results.

The rollout of HP's new multifunction printers -- which were first unveiled in late 2012 -- could provide an additional boost. HP had not refreshed its multifunction printer portfolio in nearly seven years, so this update could be the impetus for a return to revenue growth in the printing division. HP started to gain share in multifunction printers in Q2, and HP executives expect this trend to strengthen over the course of the year. This could be good news for Q3 printing results.

Stabilization elsewhere
For HP to deliver a third consecutive earnings beat, it will also need to stabilize its enterprise hardware and services businesses. The key to a recovery in hardware is the rollout of HP's new "Moonshot" low-power servers, which hit the market this spring. HP appears to be seeing strong interest in Moonshot servers from a variety of Web service providers. This growth initiative could offset much of the pain from plummeting sales of Itanium servers.

Meanwhile, some industry analysts have detected the first signs of a rebound in demand for HP's struggling enterprise services business. This could lead to significant margin growth over the next several quarters in combination with HP's ongoing cost-cutting program.

The services business has been overstaffed recently. This problem was aggravated by the company's decision to allow some unprofitable services contracts to expire. To fix this discrepancy between revenue and headcount, management has targeted the services business for job cuts.

HP is in the midst of reducing its global workforce by 29,000 people, with the majority of the reductions having occurred within the past year. As the services business becomes more efficient, margins should return to the high single-digits, which could add $1 billion or more to pre-tax profit (on an annualized basis).

Regression to the mean
While HP has been on an upswing this year, other big tech companies have posted disappointing results recently. Major IT firms like IBM (NYSE:IBM) and Cisco (NASDAQ:CSCO) have both seen slowing demand this year, and have therefore announced job cuts in the past few months.

IBM has cut more than 3,000 jobs since reporting a rare profit miss in Q1. Q2 earnings beat expectations, but revenue continued to decline, raising questions about the company's long-term profit growth potential. More recently, Cisco projected that its revenue next quarter will come in lower than previously expected. As a result of the soft demand environment, Cisco announced that it will eliminate 4,000 positions.

Investors could view competitors' weak results as a warning sign for HP. However, I think that HP is actually ahead of the curve in that it came into 2013 with much more realistic expectations.  As a result, it had already begun reducing headcount by the beginning of the year, whereas IBM and Cisco did not start cutting until more recently.  While all three companies face similar headwinds, HP is likely to post stronger earnings growth than IBM or Cisco next year, due to its deeper cost cuts.

Turnaround on track
HP's timely cost cuts, reasonable valuation, and new products like upgraded multifunction printers and Moonshot servers provide a recipe for continued share price appreciation this fall and into 2014. The company's Q3 earnings report should confirm that this budding turnaround remains on track.