Please ensure Javascript is enabled for purposes of website accessibility
Log In Help Join The Motley Fool
Free Article Join Over 1 Million Premium Members And Get More In-Depth Stock Guidance and Research
By Sara Murphy – Aug 20, 2013 at 7:00AM

Activist shareholders are flexing their increasingly powerful muscles. What do they want? Accountability. Sustainability. Diversity.

How do you make an entire corporate board squirm? Well, one way is to get enough people to support your shareholder resolution when management opposes it. And that's been happening more and more.

New research out today from the Sustainable Investments Institute, or Si2, shows that investors are filing more environmentally and socially themed shareholder resolutions now than ever before, and those resolutions are getting more support during proxy voting than they ever have. But a picture is worth a thousand words. See that trend line? It's movin' on up. 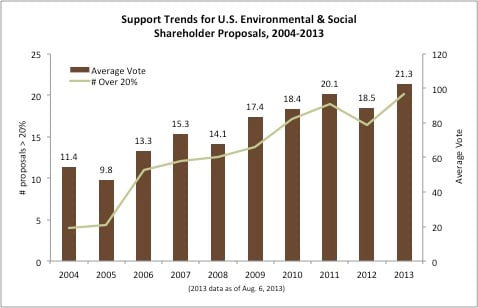 So what do shareholders want?
The range of social and environmental topics for shareholder resolutions is broad, covering such issues as fracking, animal welfare, climate change, human rights, and more. In terms of sheer numbers, there have been more resolutions dealing with political spending than any other topic, while workplace- and board-diversity topics have the highest level of support over the past three years.

This year's bombshell was at CF Industries (CF 6.10%), where three separate, management-opposed shareholder resolutions garnered majority votes. The first resolution -- requesting that CF publish a sustainability report describing its environmental, social, and governance performance, including a review of opportunities to increase operational energy efficiency -- won 67% support. The second -- seeking detailed disclosure of the company's political spending practices and procedures -- garnered 66% of votes in favor. And the third -- asking that CF adopt targeted policies to promote diversity in its board composition -- achieved 51% support.

CF wasn't the only company where this happened. Alliant Techsystems' (NYSE: ATK) management opposed a shareholder resolution on its proxy ballot seeking transparent reporting on political lobbying and spending, including both "direct and indirect" lobbying and "grassroots lobbying communications." Sixty-five percent of shareholders voted in favor of this resolution.

While they didn't achieve majority votes, similar resolutions at Peabody Energy (BTU) and Valero Energy (VLO 3.35%) gained significant support from shareholders. The resolution at Peabody, which was substantially the same as the one at Alliant Techsystems, captured 43% of the vote, up significantly from just 28% the year before. The resolution at Valero went further, seeking specific disclosure of all payments to lobbying groups on an annual basis. Supporting votes came in at 43%, up incrementally every year since the resolution was introduced in 2010.

So, then, majority rules?
Lest you imagine that these resolutions are the last word, think again. They are all "precatory," which is legal jargon for "asking somebody very nicely to do something they don't want to do." Ultimately, these resolutions are utterly non-binding. Still, don't underestimate their power. I asked Peter DeSimone, co-founder and deputy director of Si2, about the impact of a majority vote.

It is all about the message the vote sends management. If a significant number of your shareholders are expressing concern about an issue, it should give management pause. It also can catch the attention of certain key board members and prompt them to pressure management on the issue. Managements don't like to see high votes on these issues, and they usually will be more inclined to talk to proponents and negotiate withdrawal agreements when a resubmission comes their way after a high vote.

More on the horizon
There are still a few late-season resolutions on the books for 2013. For instance, Cisco Systems (CSCO -0.15%) opposes a resolution on its proxy ballot that also calls for far greater transparency and reporting on political spending. The vote will happen at the company's annual general meeting on Nov. 15. And this past Friday, shareholders filed a resolution with Tyson Foods (NYSE: TSN) related to its animal-welfare practices that has created a tremendous amount of buzz on social-media sites. All signs suggest that next year's proxy season will be even hotter.

What's it all mean?
Companies have the right to seek exclusion of shareholder resolutions from their proxy ballots under SEC rules, and they have been less successful in that endeavor this year than they were in 2012. "This could mean proponents have gotten better at framing their proposals, but it also may mean the SEC is taking a more expansive view of what shareholders should consider," observed Heidi Welsh, Si2's executive director.

Earlier this year, the SEC made a game-changing reversal of its previous stance when it upheld a shareholder resolution with PNC Financial Services (NYSE: PNC) pressing the company to assess the greenhouse gas emissions for which it was indirectly responsible through its lending portfolio, as well as the company's exposure to climate-change risk in its lending, investing, and financing activities. According to the Interfaith Center for Corporate Responsibility, "[T]his shift marks a reversal of earlier SEC rulings and sets a precedent with broader implications for resolutions seeking information about the financial sector's contribution and response to climate change."

Foolish bottom line
The takeaway from all this is straightforward: Sustainability should and does matter to investors. Irrespective of whether you, personally, think social and environmental factors are relevant to your stock analysis, the fact is that shareholders are increasingly agitating around such issues, and sustainability is now becoming a fundamental aspect of companies' basic legal compliance. Take that logic one step further, and tending to multiple stakeholders becomes a fiduciary duty. Management can no longer afford to ignore the impact their companies have on the world around them.

Sara Murphy has no position in any stocks mentioned. Follow her on Twitter: @SMurphSmiles. The Motley Fool recommends Cisco Systems and owns shares of CF Industries Holdings and PNC Financial Services. Try any of our Foolish newsletter services free for 30 days. We Fools don't all hold the same opinions, but we all believe that considering a diverse range of insights makes us better investors. The Motley Fool has a disclosure policy.