CN Rail is not an oil company, but it holds a key for Canada's oil industry.

Canada's oil sector is not the beacon of hope it once was. Canada's problem is not a lack of oil, but a lack of an effective way to bring this oil to market. Traditional pipeline companies like Enbridge (ENB -0.90%) and TransCanada (TRP -1.96%) are hard at work on the problem, but Canadian National Railway (CNI -0.34%) has a short-term solution right under its nose. 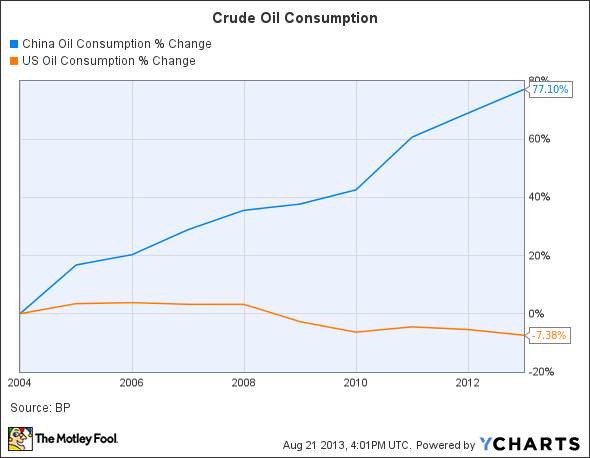 Right now companies in the Canadian oil sands are paying up to $31 per barrel to move their oil via rail car to gulf coast refineries. If producers were able to ship their oil to Vancouver they would pay for a journey around 1,200 kilometers, instead of 3,000 kilometers to Cushing, Oklahoma or close to 3,900 kilometers to Galveston, Texas.

CN Rail offers the perfect solution. It has terminals in Kitimat, Prince Rupert and Vancouver where crude could then be moved to Asian markets. Recently a lease was signed in Vancouver for a new oil terminal that will allow trains to offload their oil and place it on tankers. On the other side of the journey, Keyera and Kinder Morgan Energy Partners are building new oil loading facilities in Alberta that will make the oil transport easier.

TransCanada is famous for its Keystone XL pipeline, but it continues to struggle with governmental setbacks. The U.S. Department of the Interior has called a previous environmental impact statement inaccurate, further increasing the possibility that the U.S. government may reject the company's pipeline.

TransCanada has proposed a new pipeline to Eastern Canada and by bypassing U.S. ground it hopes to relieve itself of political difficulties, but this remains to be realized. Its latest proposal crosses Quebec, which has a very negative view of oil transportation after a recent crude oil train explosion that killed 47.

Enbridge is another midstream company working to solve Canada's crude bottleneck. The company is hoping to use Kitimat, B.C. as an export and import facility. It is planning to place a 525,000 barrel per day pipeline from Alberta to Kitimat, and a 193,000 barrel per day condensate pipeline from Kitimat to Alberta. Getting the governmental approval for this project is also under review espeically after Enbridge spilled around 843,000 gallons of heavy oil in Michigan.

The oil market is dynamic, and increasing Asian demand is reshaping trade flows. With new rail to tanker terminals in B.C., CN's network is making the company an integral asset in Alberta. TransCanada and Enbridge are still working on building new pipelines or expanding current assets, but political opposition and rail's flexibility are making many oil producers rethink their reliance on traditional pipelines.

Joshua Bondy has no position in any stocks mentioned. The Motley Fool recommends Canadian National Railway. Try any of our Foolish newsletter services free for 30 days. We Fools may not all hold the same opinions, but we all believe that considering a diverse range of insights makes us better investors. The Motley Fool has a disclosure policy.